Could a high-speed rail link between Belfast and Cork sort out our housing mess? 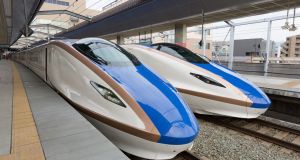 Irrespective of who forms the next government in Ireland, it is clear it will have to do something about the cost of owning or renting a home. Fail on this issue and the government’s constituent parts will be punished at the next elections.

There are no cheap or simple solutions to building homes. Democracies will not be able to seize land nor force through major housing projects in the teeth of local objections. But Ireland will need to think big if it is to house its rapidly growing young people. Here’s a potential idea.

Like thousands of rugby fans, I was lucky enough to be in Japan for the World Cup last year. And like many of those fans I came away in wonder at so many things in Japan, asking myself whether lessons could be learned in Ireland. None more so than public transport and housing.

Japan is one of the most densely populated countries in the world (906 people per square mile) and yet they manage to comfortably house most of the 126 million who live there and move them around at speed and with relative ease. I didn’t see one rough sleeper in Tokyo, which has a population of about 38 million.

The spine of Japan’s transport network is the Shinkansen rail system which moves millions of people every day at speeds of up to 320km/h.

Why can’t Ireland, with a population density of only 179 people per square mile, do something similar?

How did they build so many high-speed lines in such a dense and sprawling country? The answer is they don’t try to go into the centre of every town or city. They go near it.

So if you want to go to Kobe to try out some of the famed fillet steaks, you take the bullet train to Shin-Kobe rather than Kobe itself and change for local services.

The same applies to Osaka and Yokohama. These stations were built in undeveloped land near – rather than in – these population centres in the late 1960s. Once the lines were under construction, the developers were encouraged through tax incentives to build housing, roads, shops etc near each new station on land whose price was controlled by the state and kept affordable during construction of these new “cities”.

Amazingly Japan has enjoyed 50 years of high-speed trains on high-speed lines in newly developed conurbations or suburbs. This has allowed millions of people to commute to Tokyo or Osaka or Kyoto every day from much cheaper towns that are up to 300km away – having been priced out of the property market where they work. Sound familiar?

Why can’t Ireland, with a population density of only 179 people per square mile, do something similar? After all the cost of borrowing for the Irish State is at a record low and will probably stay low for a decade at this rate. Now is the time to borrow for capital projects.

The newly elected 33rd Dáil has a strong mandate to solve the rocketing cost of housing and woeful infrastructure, so why not announce plans to kill two birds with a single stone. Build a high-speed line from Belfast to Cork via Dublin – stopping in soon-to-be-built new towns or existing relatively unknown townlands.

Instead of passing through existing population centres such as Newry, Dundalk, Naas and Clonmel, why not build it with stops at Droma, Warrenpoint, Ardee, Naul, Athy, Coalbrook, Clogheen and Midleton?

The government could insist that all the local roads, bus or tram links, shops and houses be built before the high-speed line is operational. It could award contracts only to those developers who promise to build the highest-quality housing (including up to half as social housing) with the lowest emissions and most accessible bus or tram services between stops and the existing or “old” population centres.

Of course there would have to be stops in the centre of Belfast, Dublin (probably Heuston) and Cork Kent as well as the three airports closest to those cities.

I know some will say the demand is not there yet for such grand projects but nor was there proven demand for Dart services or even the M50 when they were initially mooted in the 1960s – let alone delivered in the 1980s.

London and Brussels would help pay for it and the all-island economy would be a big winner.

But the biggest winners will be those young boys and girls currently in primary school. They should be able to leave full-time education and start their careers in the expectation of living in their own home eventually, and get to their place of work with ease and speed.

Joe Lynam presents the Newsroom on the BBC World Service