The simplest message tends to win elections. Not policy, but marketing

Seán Moncrieff: Is democracy doomed? Only if we want it to be 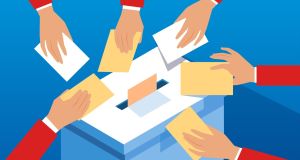 Every now and again, academics and journalists and randomers on Twitter speculate that democracy is doomed.

Last month the University of Cambridge published its latest worldwide survey on attitudes towards democracy – something it has been doing annually since the 1990s – and, in the developed world, found record levels of discontent: in 2019, 58 per cent of respondents reported feeling dissatisfied, up from 48 per cent in 2018.

There are all sorts of possible reasons for this: the economic crash, the Brexit mess, political polarisation and the much-ventilated idea that large rumps of the population feel excluded. But what’s not clear is if the respondents blamed democracy itself or the prevailing economic and political conditions. Either way, they obviously felt that democracy wasn’t working for them.

It’s too easy to list how voting never seems to produce the results that voters may have been looking for. Politicians who claim to be in touch with the struggles of ordinary folk are inevitably changed by power, a nice office, perhaps a ministerial car, but most of all by the myriad complications of getting things done. And every time voters seem surprised.

You’d think that we would have learned by now that governance is fiendishly complex. Yet what seems to win elections is simplicity. Donald Trump won – and may well win again – with simple slogans and cheesy nicknames for his opponents. Crooked Hillary. Sleepy Joe. Boris Johnson won with the simple (and simplistic) Get Brexit Done. Sinn Féin learned from its drubbing in the local elections to come up with a simple message in the last general election: housing, housing, housing.

You could argue that this is populism; whatever that is. Or perhaps it has always been a function of elections. Most of us don’t have an in-depth knowledge of economics, or how legislation is produced or the complexities of international trade or the tricky balances of social welfare. Nor should we: we have lives to lead. But this lack of detailed knowledge seems to become amplified the larger the group of voters is. Thus, the simplest message tends to win. Not policy, but marketing.

This is not a people-are-stupid argument, but perhaps it does go some way to explain why populations can vote in contradictory manners, or even against their own interests.

Fundamentally, it’s about people, about how much faith we place in ourselves

As usual, I don’t have a brilliant suggestion to fix this. To paraphrase Churchill(who was paraphrasing someone else), democracy is terrible until you consider the alternatives. And it’s unlikely that the people who express dissatisfaction with democracy would wish to get rid of it altogether. That would take power out of their hands. We all wish to have some say about our future, even if it isn’t as much say as we’d like.

Fundamentally, it’s about people, about how much faith we place in ourselves. In Ireland, we have a voting system that other countries deem too complicated for their populations. Yet there is little evidence that PR causes widespread confusion here. We seem to understand that our vote may bounce around a bit until it settles on someone able to make a quota; and that afterwards there may well be an exhausting and imperfect process of government formation.

It’s tempting to think that this is because Irish people are more clever and more realistic than others. But the truth is probably that our voting system has given us a little more credit for intelligence. It invites us to think in relative terms rather than absolutes.

And the Cambridge survey found that Irish satisfaction with democracy is over 75 per cent. The fifth highest in the world.

That’s not to say that our system doesn’t throw up baffling contradictions (see how votes transfer), the smart and the stupid. And we may well have entered a political era where we provide ambivalent answers to the question of what we want. But that’s people. Dissatisfaction with democracy is dissatisfaction with ourselves.

Jennifer Rock, The Skin Nerd: ‘I was motivated by people’s perceptions of me as a teenage mother’
7

How to have a happy Halloween, Christmas and St Valentine’s this winter
8