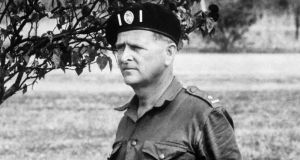 Mike Hoare in the Democratic Republic of Congo in 1964. Photograph: Central Press/AFP via Getty Images

“Mad Mike” Hoare, who emerged as one of the best-known soldiers of fortune in Africa during the 1960s, has died in Durban, South Africa, aged 100.

Hoare, who was once a staple of news headlines around the world, came to widespread public attention towards the end of the African independence era, during which mercenaries of different nationalities, many of them second World War veterans, were recruited by those with interests in the region – in Congo in particular.

Hoare was one of several prominent mercenaries to emerge in Africa at this time, including the Frenchman Bob Denard and Jean “Black Jack” Schramme, from Belgium. His renown was as much about his assiduous self-mythologising as his military skills.

His career as a mercenary, however, came to an embarrassing conclusion for his part in a failed coup d’etat in the Seychelles and subsequent hijacking in 1981, during which he was captured and sentenced to 20 years in jail, serving just over three.

“The well-known adventurer and soldier of fortune, Lt Col ‘Mad Mike’ Hoare, died in his sleep and with dignity aged 100 years at a care facility in Durban on February 2nd, 2020,” his family said in a statement.

His son Chris said Hoare “lived by the philosophy that you get more out of life by living dangerously, so it is all the more remarkable that he lived more than 100 years”.

Thomas Michael Bernard Hoare was born March 17th, 1919, to Thomas and Aileen Hoare, in Calcutta, India, where his seafaring father was an assistant dock master.

After early years in India and Ireland, Hoare attended schools in England, joined the British army in 1939, became a small-arms expert, passed officers’ candidate school and rose in the commissioned ranks.

In the second World War he fought the Japanese in the Arakan region of Burma with the Long Range Penetration Group, the British India special forces known as the Chindits, under Brig Bernard Fergusson. The Chindits struck behind enemy lines and helped demonstrate the effectiveness of guerrilla warfare.

In 1945 Hoare married Elizabeth Stott in New Delhi. They had two sons, Chris and Tim, and a daughter, Geraldine, and were divorced in 1960. In 1961, he married Phyllis Sims in Durban, South Africa. They had two sons, Michael Jeremy and Simon. In addition to Chris Hoare, the four other children survive their father.

Hoare, small in stature, and described as “dapper” and “charming”, initially qualified and worked as a chartered accountant in London – he had started training before the war – after his wartime service but finding it boring, he emigrated to South Africa in 1948. For several years he took tourists on hunting safaris, then began exploring the continent more extensively.

It was while living in South Africa, where he ran several businesses, that Hoare met Moïse Tshombe in 1961, a Congolese businessman and politician who led the succession of Katanga from the Congo. Hoare went to work as a mercenary for Tshombe’s breakaway government, which lasted until January 1962, when it was defeated by the Congolese government with the backing of the United Nations.

In 1964 Tshombe, now prime minister of the Democratic Republic of the Congo, hired Hoare – a lifelong anti-communist – to put down the communist-backed Simba rebellion, which had begun in 1963, which was led by followers of the deposed and murdered Congolese post-independence leader Patrice Lumumba.

Hoare joined several hundred mercenaries recruited from France, Germany, South Africa, Ireland and elsewhere, and was involved in the efforts to push Simba rebels out of Albertville [now Kalemie on the shore of Lake Tanganyika], leading a night-time boat attack on the rebels with the aim of capturing the town’s airstrip.

On his return to South Africa, he reportedly told journalists that “killing communists is like killing vermin, killing African nationalists is as if one is killing an animal”.

“My men and I have killed between 5,000-10,000 Congo rebels in the 20 months that I have spent in the Congo. But that’s not enough. There are 20 million Congolese you know, and I assume that about half of them at one time or another were rebels whilst I was down here.”

Nicknaming his fighters the Wild Geese, his involvement in putting down the rebellion later formed the fictional basis of the 1978 film The Wild Geese, starring Richard Burton, Roger Moore, Richard Harris and Hardy Krüger, on which Hoare worked as an adviser.

The nickname “Mad Mike” had its alleged roots in a critical broadcast on East German radio that described him as “that mad bloodhound Hoare”.

Nearly two decades later, however, and somewhat long in the tooth, Hoare was in the headlines again for his participation in a farcical coup attempt in the Seychelles designed to return the country’s pro-western former president James Mancham to power and remove its socialist incumbent.

Posing as rugby players on a drinking tour and calling themselves the “Froth Blowers”, Hoare and his men were unmasked when an airport inspector found a weapon in their luggage on landing and a gunfight broke out.

The men then hijacked an Air India flight and forced the pilot to take them to Durban in South Africa to escape. Hoare was arrested, convicted and sentenced to 20 years.

At his trial, Hoare, who said he had been paid $100,000 for his part in the coup by an unknown party, was unrepentant despite having abandoned several of his fellow conspirators in the Seychelles to face the death penalty (later pardoned). “I did my duty as I saw it; I brought my men home safely and I am proud of that,” he said.

Hoare served nearly three years in jail, before he relocated to France, where he lived for 20 years before returning to live in South Africa in 2009. – Guardian