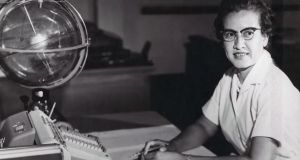 They asked Katherine Johnson for the moon, and she gave it to them.

Wielding little more than a pencil, a slide rule and one of the finest mathematical minds in the country, Johnson – who died aged 101 at a retirement home in Newport News, Virginia – calculated the precise trajectories that would let Apollo 11 land on the moon in 1969 and, after Neil Armstrong’s history-making moonwalk, let it return to Earth.

A single error, she well knew, could have dire consequences for craft and crew. Her impeccable calculations had already helped plot the successful flight of Alan Shepard, who became the first American in space when his Mercury spacecraft went aloft in 1961.

The next year, she likewise helped make it possible for John Glenn, in the Mercury vessel Friendship 7, to become the first American to orbit the Earth.

Yet throughout Johnson’s 33 years in Nasa’s Flight Research Division – the office from which the US space programme sprang – and for decades afterward, almost no one knew her name.

Johnson was one of several hundred rigorously educated, supremely capable yet largely unheralded women who, well before the modern feminist movement, worked as Nasa mathematicians.

But it was not only her sex that kept her long marginalised and long unsung: Katherine Coleman Goble Johnson, a West Virginia native who began her scientific career in the age of Jim Crow, was also African-American.

In old age Johnson became the most celebrated of the small cadre of black women – perhaps three dozen – who at midcentury served as mathematicians for the space agency and its predecessor, the National Advisory Committee for Aeronautics.

In 2015 President Barack Obama awarded her the Presidential Medal of Freedom, proclaiming, “Katherine G Johnson refused to be limited by society’s expectations of her gender and race while expanding the boundaries of humanity’s reach.”

As Johnson herself was fond of saying, her tenure at Langley – from 1953 until her retirement in 1986 – was “a time when computers wore skirts”.

For some years at midcentury, the black women who worked as “computers” were subjected to a double segregation; consigned to separate office, dining and bathroom facilities, they were kept separate from the much larger group of white women who also worked as Nasa mathematicians. The white women in turn were segregated from the agency’s male mathematicians and engineers.

But over time, the work of Johnson and her colleagues – myriad calculations done mainly by hand, using slide rules, graph paper and clattering desktop calculating machines – won them a level of acceptance that for the most part transcended race.

Creola Katherine Coleman was born on August 26th, 1918, in White Sulphur Springs, West Virginia, the youngest of four children of Joshua and Joylette (Lowe) Coleman. Her mother was a schoolteacher, her father a farmer.

“I couldn’t wait to get to high school to take algebra and geometry,” Johnson told the Associated Press in 1999.

Katherine entered high school at 10 and graduated at 14. The next year she entered West Virginia State. By her junior year she had taken all the math courses the college had to offer.

Her mentor there, William Waldron Schieffelin Claytor, only the third black person to earn a doctorate in mathematics from a US university, conceived special classes just for her.

“You would make a good research mathematician,” he told his 17-year-old charge. “And I am going to prepare you for this career.”

“Where will I find a job?” Katherine asked.

In 1940, she was chosen by the president of West Virginia State to be one of three black graduate students to integrate West Virginia University, the all-white institution in Morgantown.

But after that summer session, on discovering she was pregnant with her first child, she withdrew from the university. She returned with her husband to Marion and was occupied with marriage, motherhood and teaching for more than a decade.

Then, in 1952, Katherine Goble heard that Langley was hiring black women as mathematicians.Among the first hired was Dorothy Vaughan, who began work that year. In 1951 Vaughan became the first black section head at NACA, as the advisory committee was known, when she was officially placed in charge of Langley’s West Area Computing Unit, the segregated office to which the black women were relegated.

It was in this unit that Katherine Goble began work in June 1953, tabulating sheets of data for the agency’s engineers.

By the time she arrived, the company cafeteria had already undergone de facto desegregation: Its “Colored Computers” sign, designating a table in the back for the women, had been a salubrious casualty of the war years. But the separate bathrooms remained.

Quite by accident, Goble broke that colour line herself. While the agency’s bathrooms for black employees were marked as such, many bathrooms for whites were unmarked.

Without realising it, she had been using a white women’s restroom since her arrival. By the time she became aware of her error, she was set in her routine and disinclined to change. No one took her to task, and she used the white bathrooms from then on.

Two weeks into her new job, she was borrowed by the Flight Research Division, which occupied an immense hangar on the Langley grounds.

There, the only black member of the staff, she helped calculate the aerodynamic forces on airplanes. For that task, as she quickly demonstrated, she came armed with an invaluable asset.

“The guys all had graduate degrees in mathematics; they had forgotten all the geometry they ever knew,” Johnson said in the Fayetteville Observer interview. “I still remembered mine.”

She remained in the division for the rest of her career.

It helped sustain her through the death of her first husband from brain cancer in 1956, leaving her, at 38, a widow with three adolescent daughters. She married James A Johnson, a US army captain, in 1959.

Over the years Katherine published more than two dozen technical papers. She was among the first women at Nasa to be a named author or co-author on an agency report.

Ceaselessly curious about the aerospace technology that underpinned her work, she made it possible for women to attend the agency’s scientific briefings, formerly closed-door affairs reserved for male staff members. (“Is there a law against it?” Johnson asked, and when her male colleagues, after some head-scratching, concluded that, no, there was no law, they let her in.)

Her death was announced by Nasa. She is survived by two daughters, Joylette Hylick and Katherine Moore; six grandchildren; and 11 great-grandchildren. Another daughter, Connie Garcia, died in 2010; her second husband, James Johnson, died in 2019.