It is rare to be born on leap day, even rarer to have a sibling who shares the birthday 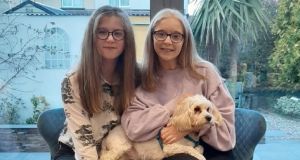 Leap-day siblings: Robyn and Lana McKeon, who turn 12 and 16 on February 29th

What do Ja Rule, Pope Paul III and Zig and Zag have in common? They were all born on February 29th.

It is the least common birthday to have: in simple terms, you have only a 1 in 1,461 chance of being born on leap day.

Today, leap day babies of all ages will get the chance to celebrate their actual birthdays for the first time since 2016.

So what is it like to only have a birthday once every four years?

Growing up, O’Donovan didn’t pay much heed to the fact that he had an unusual birthday. Every four years, his mother would tell him: “You have a real birthday this year”, but otherwise he would just celebrate it on February 28th.

It was only when two alien twins landed on our television screens from Planet Zog that he realised he had a special birthday.

What kind of questions do you get when your birthday is February 29th?

Children, he says, get a great kick out of hearing about his birthday. “I have a 10-year-old niece, Lily, and she gets a great thrill out of the fact that we’re the same age and that next year she’s going to be older than me,” he says.

Just this week, he received a birthday card from his friends’ daughters. “Dear Mick, happy 11th birthday,” it read. “We are very interested to hear about your birthday on the 29th of February. Love, from Isabel and Lola.”

Any other upsides to being a leap-year baby?

“They say people are lucky as well,” says O’Donovan. “I wouldn’t say I’m particularly lucky but I have absolutely breezed my way through life.”

I always celebrated my birthday on March 1st. That made sense because on the 28th of February, 1996, I wasn’t yet born but on March 1st I was

Another person celebrating their birthday this weekend is Andrew Duggan-Murphy. Originally from Naas, Co Kildare, he was born on February 29th, 1996. That means he will celebrate his actual birthday for the sixth time this weekend.

“People are asking me what I am doing for the big 6th,” he says.

That he has this birthday at all is something of a fluke. “I was actually due on the 12th of February,” he explains. “I was 17 days overdue and there was an emergency C-section to get me out on the 29th. So I wasn’t even meant to have this birthday. I should have been 24 years old about two weeks ago.”

On top of that, there has been much confusion about when he celebrates his birthday.

“I always celebrated my birthday on March 1st,” he explains. “That made sense because on the 28th of February, 1996, I wasn’t yet born but on March 1st I was.”

“But when I joined Facebook, it told my friends that my birthday was February 28th,” he adds. “So I was getting all these birthday wishes on the 28th when it wasn’t my birthday as far as I was concerned. By the time March 1st came around, nobody really said much to me because they thought it was the 28th. That kind of messed things around a bit.”

When his birthday does roll around, he usually gets cards intended for much younger children. At this stage, he says he is well accustomed to the jokes that come his way.

“Day to day, I am reluctant to say my birthday because you can see people’s pupils dilating nearly when they realise.” They say: “Oh, the 29th? How old are you really?”

So how will he ring in the big 6th?

“I am travelling home for pints with my family,” he says.

Whatever about having your own birthday on February 29th, what is it like having not one, but two leap-year babies?

My waters went on the leap-year morning and I thought, Oh Jesus, this couldn’t happen again

Suzanne McKeon and her husband Martin are the parents of Lana and Robyn. Both girls were born four years apart on February 29th.

Lana was born on February 29th, 2004. “When I was having Lana, it didn’t even cross my mind,” she recalls. “It wasn’t until I was in the maternity ward that someone said to me, ‘If you don’t have this baby by 12, this is going to be a leap year’ and I was like, ‘I never even thought of that’.”

Four years later, Suzanne was expecting her second child. She was due around March and expressed concern about her daughters potentially sharing the same birthday but was assured this was unlikely.

“Then my waters went on the leap-year morning and I thought, Oh Jesus, this couldn’t happen again,” she says. “I thought, Well, Lana was 14 hours, so if this one is going to be in the same time frame she might escape being born on leap year. But she was born from front to end in six hours.”

Over the years, the pair have garnered significant attention. One year, they were invited to the Mansion House to a party hosted by the lord mayor of Dublin. There have also been radio and television appearances.

This weekend, Robyn and Lana will celebrate their actual birthdays for the third and fourth time, respectively. It is extremely rare to have two children born on February 29th, but the McKeon family takes it in their stride.

“When you only have the two and they’re both born on the same day you kind of go, ‘Really? Is it all that unusual’?” she laughs. “But obviously it is because everyone says it to us.”