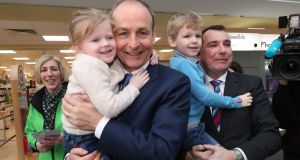 ‘Don’t worry,” said the man calling at the door, with an offer, it transpired, to deliver milk. “I’m not a politician, I promise.”

Actually, my experience is that lots of people like politicians to call to their doors and ask them for their vote during an election campaign. They often want to interrogate them – especially if the caller is from a party of government – and, occasionally, give the visitor a piece of their mind. But politicians in all parties report that most people are polite and often engaged. Last week, I sat in Mullingar and listened to a focus group complain about politicians who didn’t call to their doors, and sent their leaflet through the post. A major black mark round Mullingar way, I can report.

Canvassing works. Studies show that the most successful candidates are those who ask most people for their votes; people are more likely to vote for someone who has asked them personally for their vote.

The politician is a peculiar animal. Part egotist, part altruist; self-centred, but public-spirited; ballsy but insecure

Ideally, this is not confined to election time, but is carried out during peacetime as well, so that when the candidate returns during an election campaign, he or she is not an unfamiliar face. Micheál Martin, for instance, who seems poised for a successful election, has spent most Thursday evenings for the last several years canvassing – mostly but not exclusively in Dublin – with one of his candidates. It would be too much to put down Fianna Fáil’s expected recovery in Dublin to Martin’s weekly perambulations. But they helped. Everyone calls this “putting in the work”. And many of them work like dogs.

The politician is a peculiar animal. Part egotist, part altruist; self-centred, but public-spirited; ballsy but insecure; craving approval, but capable of putting up with the most vicious abuse. Many are larger than-life-characters, full of energy, brimming with vim and vigour. The comparison I often reach for is from the film Casablanca. What kind of man is Captain Renault, the desperate girl asks grizzled old bar owner Rick. “Oh he’s just like any other man,” replies Rick. “Only more so.” That’s politicians for you – like the rest of us, only more so.

Like the rest of us, they do it for a mixture of reasons and motives. For some it’s the family business, and they’ve been reared to it. For others, it’s a burning desire to make their country better. For others, a burning desire to get on the news. For some, a single incident turned them towards politics; others, it’s an inevitable trajectory – the arc of their life draws them irresistibly to their destiny (alas the voters don’t necessarily agree).

In politics, there is the opportunity to do great good. But it requires politicians to achieve it. Think of the lives changed by Donogh O’Malley through free education. Think of the lives saved by the efforts of Seamus Mallon and John Hume, by David Trimble and those who stood with him in the face of fire and brimstone from Ian Paisley, who himself belatedly saw the light; by the efforts of Mo Mowlam and Tony Blair and Bertie Ahern. And, yes, by Gerry Adams – though there is another side of that ledger, too.

Sure, the outgoing Dáil – and the aspirant incoming one –- might not be a collection of Humes and O’Malleys. But our parliamentary democracy requires that people take on the personal challenge of trying to get elected in order for it to work. If there is conceit at the centre of this – the world will be a better place if I am elected – then there is also a willingness to sacrifice time, effort, dignity and family in the service of one’s community.

Look at the exhausted faces of candidates after weeks of campaigning. Look at what they put themselves through.

Look at government ministers pounding the streets desperate to save their seats. “I think I got three waves for every finger,” one told me of an early canvass spent waving at cars.

If we don’t like them, we can sack ’em. There are billions of people in the world who do not have that privilege

There was Josepha Madigan, prevailing upon her teenage sons to appear in her campaign video (she recorded it in her kitchen, beside the biggest island in Irish politics since Inishvickillaun). Imagine having to go into school after that.

Danny Healy-Rae, never destined perhaps to be a statesman, was out canvassing when he called into a young lad’s birthday party. He came in, played a few tunes on the squeezebox and gave a young fella 20 quid. You can accuse Danny of many things, but you can’t say he doesn’t look after his constituents.

Richard Boyd Barrett is still pounding the streets for a revolution he knows in his heart will never come. Pádraig MacLochlainn must have covered the distance to the moon and back around Donegal. Aodhán Ó Ríordáin practically begging the voters of Dublin Bay North to send him back to he can get even more abuse.

There are hundreds and hundreds of them.

The politicians who knocked at your door may not deserve your vote – that’s your call – but they do deserve your respect. And your community deserves your participation. Every few years we get to issue a set of (frequently confused and confusing) instructions to the politicians we choose to lead us. If we don’t like them, we can sack ’em. There are billions of people in the world who do not have that privilege. So bring the kids to their matches today, get the shopping done, fix the dripping tap, go to yoga, wash the car, visit your granny, get a few beers in and watch the rugby – whatever. Just make sure you go and vote. This is something you should be part of.