Would it be irresponsible to go for a walk this weekend? 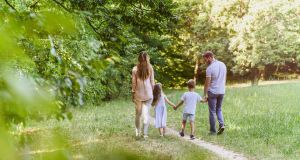 The National Parks and Wildlife Service (NPWS) has warned that some people are congregating at favoured outdoors beauty spots and trails, in numbers and proximity that could be conducive to spreading coronavirus. Fáilte Ireland had already asked us not to flock to hotspots like Glendalough or Howth on St. Patrick’s Day. Some of us were not listening.

The concerns raised by the NPWS are entirely legitimate. And this chronically under-resourced service must not be asked to take on the impossible task of policing social distancing on hiking routes.

But does this mean those of us not suffering coronavirus symptoms should not exercise outdoors? Should we also entirely forego the vital mental and physical benefits that come from enjoying the natural world in springtime, at this moment of unprecedented personal and national anxiety?

We don’t have much time for debate, because this is a such a fast-moving crisis. And there are still many known unknowns. Can asymptomatic individuals transmit the virus? Over what distances it can be transmitted?

Our leaders, in politics and health care alike, have the grim task, on a daily basis, of practising triage - identifying the option with the highest likely benefits, even though they know this option actually, or potentially, also carries a very high negative cost.

Several countries have already imposed total lock-down as a last-ditch strategy. California has just joined them. There are strong arguments in favour of this option. It seems to have worked, albeit too late for many, in China, though Singapore has taken a very different route, with apparent success, so far.

Our government’s approach, closing schools, pubs and sporting and entertainment events, has already taken us towards total lock-down. These measures enjoy widespread public support. So does the call for symptomatic individuals, whether diagnosed or not, to self-isolate.

The question now is whether we should go the whole way, and completely confine people without symptoms inside their homes -- unless they can show police that they are outside to buy food, medicine, or perform essential work.

Such a drastic move would deny us the benefits of going out for fresh air, fitness, and relief from cabin fever. It would coop up youthful energies and drive parents mad. It would deny us all the balm of green shoots, spring flowers and birdsong for our very troubled minds. It would divert many public servants from vital tasks.

Nevertheless, Italy, Spain, and France, have now stumbled down this route. They have put tens of thousands of police on the streets to fine violators. Individuals and family groups cannot take a short local walk, or a solo cycle, even in rural areas.

In Spain at least, one bizarre exemption is permitted, according to some observers: you can go out anywhere, even in densely populated cities, if you are exercising your dog. This not only confers a curious privilege (and/or risk) on dog-owners. (‘What about my pet mongoose, Sergeant?’)

It also appears to make nonsense of the notion underlying the total lock-down strategy: that the virus is easily transmitted between asymptomatic individuals in open spaces.

But, to the best of my knowledge, we have not been told by any medical authority that there is any such risk of contagion outdoors, as long as we all practice sensible social distancing. If that risk does exist, we should be told about it at once. But that would then raise questions the two-metre spacing we are being asked to practice indoors, in supermarkets and pharmacies.

If no risk of asymptomatic contagion exists outdoors, as long as we do not linger in proximity to others, then the government should not impose a total lock-down. But we will need to be sensible, and work out ways to avoid forming groups.

The arguments in favour of outdoor access for people without symptoms are very strong. Physical exercise boosts the immune system, which is key to surviving any subsequent coronavirus infection.

Moreover, there is abundant and compelling medical evidence that even small periods of immersion in the natural world has very significant mental - and physical - health benefits. And these benefits are more urgently needed by all of us today, with the social deprivation created by partial lock-down, and the deep anxiety generated by the pandemic.

It should not be beyond our wit to maintain the same kind of social distancing while walking, running or cycling that we are already learning, surprisingly fast, indoors.

It seems a reasonable precaution to go out accompanied only by people with whom we share our homes. Outdoor organisations, from anglers to birders to mountaineers, should tell their members never to congregate.

We should explore local routes rather than national hotspots. But those of us who live in cities may still find that our local parks, riversides and beaches are becoming congested with walkers and cyclists. In that case, we might perhaps consider a scheme, publicised through all media, along these lines: those of us with surnames starting A to M could go out one day, those staring N to Z the next.

We will get through this crisis by policing ourselves, by looking out for each other, and by being kind. Hopefully, we can still benefit from enjoying outdoor life in the same spirit of solidarity we are learning to live by in public indoor spaces: paraphrasing the Taoiseach, we stand together by walking or cycling apart.

Paddy Woodworth is a journalist and author of Our Once and Future Planet: Restoring the World in the Climate Change Century