The states best placed to fight the virus are those that prepare, plan and learn 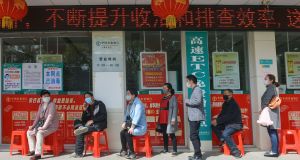 China presents itself as a lesson in how states can push back the deadly virus. Customers lining up to have their temperature taken before entering a bank in China’s central Hubei province. Photograph: STR/AFP via Getty Images

Just a month ago, as it was fighting to contain the first outbreak of coronavirus, in Hubei province, China was widely thought to have botched its response to the crisis. The number of infections was soaring, and with it the fatality rate. The Communist Party’s plan to lock down the provincial capital, Wuhan, looked like a desperate experiment aimed at belatedly taking hold of a crisis that had been made worse by months of official denial and missteps.

Today, China presents itself as a lesson in how states can push back the deadly virus. On Wednesday, Beijing said, Hubei recorded no new cases of Covid-19 for the first time since the outbreak was first reported late last year. A number of new hospitals built to treat coronavirus patients in Wuhan have closed, and while the authorities are alert to the possibility of a second infection wave, the city’s 11 million inhabitants are slowly emerging from a lockdown that forced them to stay in their homes for almost eight weeks. The World Health Organization has praised China for its aggressive response and governments and scientists across the world have looked to Hubei as an example in large-scale disease suppression.

Some in the west have come to a similar conclusion: that authoritarian systems perform better than democracies in times of crisis

In Beijing’s account, that success is not merely one of public-health logistics; it is a triumph of ideology. “The advantages of the Chinese system have once again been demonstrated,” the Communist Party newspaper proclaimed. “Only in China and only under the leadership of President Xi can there be such effective measures to put this sudden and fast-spreading epidemic under control,” said foreign minister Wang Yi. China’s generosity towards other badly-affected countries – notably Italy, to which it dispatched tonnes of emergency supplies last week – has further enhanced its leadership credentials, serving as a counterpoint to the chaotic, incoherent approach to the crisis pursued by the United States.

Some in the west, looking at the shutdown of Wuhan (and assuming the official Chinese data is accurate), have come to a similar conclusion: that authoritarian systems perform better than democracies in times of crisis. Champions of liberal democracy have looked at it through the same frame, but pointing out that while totalitarian states can build hospitals quickly, they lack many of the things needed to fight an epidemic, such as openness, a free flow of information, public buy-in and dialogue between citizens and government. They also observe that state secrecy and the punishing of whistleblowers contributed to the early spread of the coronavirus in China. The Economist last week sought statistical support for the superiority of democracies. Analysing data on all recorded epidemics since 1960, it found that democracies appeared to have consistently lower mortality rates than non-democratic states.

Clearly, however, it’s facile to think that systems of government are the only factor determining a state’s success in protecting its citizens at a time like this. Even at this relatively early stage in the Covid-19 pandemic, it is clear that something else is at play. Put simply, the states best placed to fight the virus appear to be those that prepare, plan and learn from past experience.

South Korea, which at the beginning of this month was experiencing the largest epidemic outside of China, has managed to contain this infection wave and keep the death rate under 1 per cent. It achieved this through good government: mass testing (with results available within hours), education, the mobilisation of civic society and consistent official messaging. Seoul clearly absorbed the lessons of the Middle East Respiratory Syndrome outbreak in 2015, when a lack of testing kits allowed the pathogen to spread, killing 38 people. Similarly, Taiwan and Hong Kong have so far managed to blunt the impact of the virus thanks to new structures and practices they put in place after being badly hit by the SARS outbreak in 2003.

In contrast, some of the countries worst hit by the outbreak were either slow to spot its prevalence (Italy) or denied its scale or significance (Iran, the US) until it was spreading widely. Good leadership matters: the confused messaging from Donald Trump and Boris Johnson, and their failure to use the time they had to prepare, has clearly exacerbated the problem in the US and the UK. So too has political-bureaucratic bungling: the Trump administration failed to act on internal warnings about its own ill-preparedness after the 2014 Ebola outbreak and now finds itself short of vital equipment and supplies.

The west is wrong to think its values alone will see it through the worst of the crisis, just as the autocrats are wrong to believe they can defeat it by force and diktat alone. What the crisis underlines so far is the role of more prosaic virtues of government: good planning, co-ordination, communication and good, steady leadership.