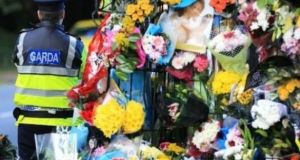 The scene at the site of the fire that claimed 11 Traveller lives in Carrickmines in 2015. Photograph: Nick Bradshaw

Des Bishop has this week apologised for his 2018 comments on US radio station Sirius XM about Travellers, and in particular to Travellers in the Tuam area, who had treated him very well when he filmed part of a six-episode series there 15 years ago.

Travellers and their concerns only seem to rise to the surface of Irish consciousness when there is a controversy or tragedy. There are times when we are shamed into concern, such as the devastating Carrickmines fire, which happened almost exactly five years ago.

Eleven members of the Connors, Lynch and Gilbert families died due to smoke inhalation. They included Jim (5), Christy (3) and six-month-old Mary Connors, and Jodie (9) and Kelsey (4) Lynch along with Tara Gilbert and her unborn child.

They had been in a halting site which had been in operation for eight years but was not subject to regulation because of its “temporary” status. It could never have become permanent because it was a completely unsuitable site. The fire began because of a chip pan. Part of the reason so many died was because of overcrowding.

Then, last June, Traveller James Reilly was convicted of raping his sister and his seven daughters and sentenced to 20 years. In a moving interview conducted by Kitty Holland, Helen O’Donoghue, one of the daughters, spoke of years of abuse and neglect. She also pointed to the systemic racism in Irish society.

She said, “Settled people, mostly they looked down on us Travellers, thinking ‘That’s the way they live – dirty, smelly’. If we had been from a settled family, people would have noticed the neglect more. They would have cared more.”

There are stalwart allies of the Travelling community who do care, but otherwise, her comment rings uncomfortably true.

The Travelling community is also neglected when it comes to scientific research, as a team led by Kevin Malone, UCD professor of psychiatry, and Sally McKey, an insightful young doctor with a particular interest in mental health and inequality, discovered recently.

This is extraordinary, given that while they constitute less than 1 per cent of the Irish population, Travellers account for 10 per cent of national young adult male suicides. O’Donoghue describes making her first suicide attempt at the age of 12 and many more after that. The problem is so bad that some Traveller communities organise their own informal suicide watches. As Malone says, despite these realities, Travellers are virtually invisible in the scientific peer-reviewed literature.

A  groundbreaking study, the All Ireland Traveller Health Study (AITHS) was published in 2010. It was a community-based census survey of all Traveller households on the island of Ireland in 2008 and 2009. It found that the overall Traveller life expectancy was 66 years, that is, 15 years less for Traveller men and 11 years less for Traveller women than the general population. The Traveller infant mortality rate is four times higher. Unsurprisingly, AITHS also found a 2.4-fold elevation in mental health distress, and a 6.6-fold increased risk of suicide.

It is hard to imagine that the situation has got much better in the intervening decade. Now, the cold shadow of the coronavirus recession will make things worse.

As a society, we rely on anecdotes, stereotypes and often blind prejudice when it comes to understanding mental health and suicide in the Travelling community

For example, Prof Michael Marmot conducted a landmark review 10 years ago in the United Kingdom, which concluded that the social environment in which we live has a great impact on our health, both physical and mental. In a follow-up to his original work which was published this year, he found that after the austerity years, for the first time in a century the increase in life expectancy has “slowed dramatically, almost grinding to a halt” while people are living for more years in poor health, including poor mental health.

This fits right in with the Traveller experience and that of indigenous ethnic peoples around the world. Malone is calling for the scientific community not to look away from the impact of poverty, prejudice and inequality on mental health in Travellers, but towards it.

As a society, we rely on anecdotes, stereotypes and often blind prejudice when it comes to understanding mental health and suicide in the Travelling community. Careful, objective scientific research could supply us with facts instead. All that would then remain would be the hard work of confronting our unwillingness to implement the resulting conclusions.

The alternative is to continue to do to Travellers what O’Donoghue described as being “thrown to the wind, left to live or die” except for the brief moments when we choose to pay attention.