UK on course for ‘significant rift’ with US over Brexit 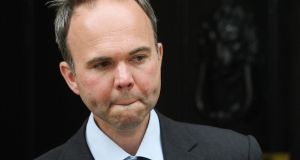 The UK government is on course for a “significant rift” with the US over Brexit, Theresa May’s former chief of staff has warned.

Gavin Barwell said the UK’s controversial Internal Market Bill, which gives it the power to override parts of the Brexit withdrawal agreement, will put it at odds with the incoming administration in the White House.

He also claimed that certain clauses in the Bill were included solely to exert leverage in the negotiations, but that this had backfired on the UK.

Speaking at a webinar on Brexit, hosted by consultancy PwC, he said the election of Joe Biden in the US was probably a “good outcome for the UK, but a more mixed outcome for the current UK government”.

“On climate change, on Nato, on dealing with the pandemic, the Biden administration will be a much easier partner [for the UK] than the Trump administration,” he said.

“Clearly where there is a difference is on Brexit. Trump doesn’t like the European Union, was an active supporter of Brexit whereas I think Biden clearly feels Brexit was a mistake.”

He warned that if the UK government were to go ahead with its plan to pass the Internal Market Bill, “that is going to cause a significant rift with the Biden administration”.

The UK’s House of Lords voted on Monday to remove certain aspects of the Bill, but Downing Street has vowed to press on with the original legislation, which is seen by Dublin as a threat to the Belfast Agreement.

Lord Barwell said he believed the Bill’s controversial clauses that seek to override the Brexit Withdrawal Agreement were deliberately included as a bargaining ploy.

However, he said this was a “misjudgment”, one that has only hardened to the EU’s resolve.

With seven weeks to go to the Brexit deadline, Lord Barwell said he believed a deal was more likely than no deal, suggesting the pandemic would increase pressure on both sides to find a compromise.

The US presidential election would also increase that pressure on the UK side, he said.

“European governments may feel less inclined to compromise now because they’ll feel the British government is under more pressure with the election of Biden,” he said.

Lord Barwell said he believed British prime minister Boris Johnson would try and find a compromise and “portray it as a negotiating triumph”, similar to what he did with the original withdrawal agreement.

He categorically ruled out the prospect of Mr Johnson seeking an extension on the current December 31st deadline.

Also speaking at the event was John O’Loughlin, PwC partner and leader of the group’s global trade and customs team, who said that even if there was a deal, firms here would still be facing customs controls when trading into the UK.