What will satirists do now Trump is on his way out? 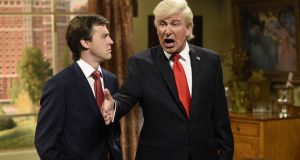 Alec Baldwin’s competent but unremarkable impression of Trump was about the best challenge Saturday Night Live could muster to the US president. Photograph: Will Heath/NBC/NBCU Photo Bank via Getty Images

In the aftermath of the electoral catastrophe of 2016 – which saw Donald Trump beat Hillary Clinton to the White House – for a moment everyone was talking about Saturday Night Live. Kate McKinnon, dressed as Clinton (white pantsuit and all the accoutrements), sang Leonard Cohen’s Hallelujah.

The coalescence of Trump’s distressing victory and the fitting lyrics (“I did my best . . . I’ve told the truth, I didn’t come to fool you”) left an impression.

Twee? Sure. Sentimental? Unbearably so. But even the hardest of hearts ought to have been moved by the rare moment of gold in SNL’s long playbook of otherwise milquetoast and uninspired political commentary. The effect was easy to achieve – the message felt sincere because it sincerely reflected the political sensibilities of the show’s creators: broadly liberal; comfortable in its opposition to a cartoon villain; distressed at what Clinton’s loss demonstrated about the state of the nation.

Since then, SNL – the supposed cornerstone of American political TV satire – could muster very little of substance against the administration: confused caricatures of White House staffers; Alec Baldwin’s competent but unremarkable impression of Trump; jokes about Rudy Giuliani that made little comment on anything beyond his appearance.

Resistance to malign political force, of course, is not the sole locus of good art. But it has historically been a fertile one

It may have satisfied the leanings of the already partisan viewer, but reflected an inherent laziness in the creators. If Trump were so malign where was the courage to actually censure him?

It is not just SNL. The widespread cultural response to Trump has been wholly inadequate: oscillating between lazy pastiche; infantile gestures to “Drumpf” as a more suitable moniker for the man; and artistically immature renderings of his image (a blimp of the president depicted as a baby, flown over London during his state visit; a naked statue seemingly making the singular criticism that he is too fat).

But it is perhaps no surprise there was a wholesale failure to mount meaningful artistic resistance. Those responsible for the bulk of American cultural output are (by no coincidence) those who possess the lowest stakes when it comes to the elevation of a cruel man to president. It is an unfortunate product of a society racked by inequality that access to these creative fields is largely limited to the politically left-of-centre, non-radical, and wealthy.

But the concern this ignites is not just in the reaction to the Trump administration – lacking though it may have been. Rather, if that’s the best we can muster in the face of a very obvious enemy, where does it leave us when it comes to pop-culture output under Joe Biden?

A man who may very well run an imperfect administration, littered with the potential for political failings; but nonetheless a man who represents a departure from, and a defeat over, the so-called horrifying political reality of Trumpism. For all of SNL’s lack of humour it at least had as its target something its creators conscientiously objected to.

It seems the popular reaction to the past five years in politics was one that privileged superficial observation and toothless satire over palpable ire for a clearly defined miscreant. Now Trump is on his way out we must wonder where it leaves our comedians, writers and artists for whom wholesale disavowal of Trumpism was their bread and butter.

And it raises the question: where do they source their inspiration when confronted with a president-elect who ran on a platform of representing everything Trump was not?

Resistance to malign political force, of course, is not the sole locus of good art. But it has historically been a fertile one. The impulse for art and popular culture to comment on political realities has held for centuries; no matter how far the scale and quality of those realities has changed. Aristophanes’ comedic pillorying of Athenian demagogues; Virgil’s subversive poetry on Roman imperialism; Picasso’s Guernica; American Realism – you name it.

But now the challenges facing those responsible for large-scale cultural output are myriad. A failure to adequately satirise someone roundly despised by the creative industry is one thing; how do we expect them to fare when it comes to commenting on a benign and largely popular political figure?

And, thanks to the climate of “wokeness” that has emerged as a mainstream concern in the past decade – a climate that holds creators to unwritten and often nebulous rules about what can and can’t be made fun of – the task of the satirist has become a minefield. That terrain is only made harder to navigate when they are no longer united by a common enemy.

If we believe vast swathes of culture is produced out of a sense of opposition to powerful political forces, when you take Trump out of the equation you remove the easiest of targets. What inspiration is left to draw on now there is nothing so obvious to resist? It may well be a dreary prediction – and certainly not a priority – but a Biden presidency might well spell a cultural landscape even more of a damp squib than the last.