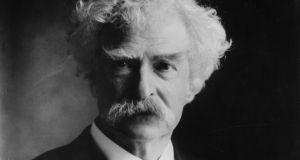 If Mark Twain is to be believed – and he would have been the first to urge caution in that regard – he was for several years in the 1870s the subject of cult-like devotion in a placed called “Corrigan Castle”, located somewhere in Ireland.

That was where the “Mark Twain Club” met monthly. It had 32 members, a constitution, and a membership badge so ornate that when Twain had a New York jewellers value the copy sent to him, he was told they couldn’t make a profit reproducing it for sale at $75 apiece.

As for the club’s discussions of his work, those were so impassioned that the monthly summaries, posted to Twain and always accompanied by questions, ran for 25 densely but well-written pages each.

He noted that of the 32 members, five were especially eloquent at meetings, so that he came to recognise them from their oratorical styles alone. Messrs Palmer and Forbes, for example, could never talk without attacking each other, although their modes of abuse differed greatly. Mr Naylor had a polished manner, rich in metaphor; Mr Norris’s speech was plainer but always “compact, lucid, and strong”. But Calder was the “gem”. He “never spoke when sober” and when he did speak, was unwittingly hilarious.

Alas the entertainment value of the monthly dispatches became outweighed in time by the work they demanded of Twain, through answering the club’s endless questions and posing for the new portraits they also requested regularly.

“By and by I came to dread those things,” he wrote “and this dread grew […] until I got to anticipating them with a cold horror.” So one day he stopped answering the letters and instead took to burning the “fat envelopes” on arrival. Sometime after that, they stopped arriving.

Then he forgot all about them until many years later, during a tour of Australia, when he learned that the entire thing had been a joke. There was no Corrigan Castle, it turned out. The Mark Twain Club was equally fictional. Its monthly meetings had occurred only in the imagination of a charming, middle-aged Irishman in whose company Twain found himself one evening in 1895, while visiting the Victorian city of Bendigo.

That event is recorded in his travelogue Following the Equator (1897). Despite the title, the tour had been mainly confined to English-speaking outposts of the British empire, an itinerary arranged so that Twain, by then bankrupt, could also give lucrative lectures wherever he went. Hence the visit to Bendigo, a long way from the equator.

Twain does not identify his Irish admirer there, other than as “Mr Blank”. He describes him as an “an educated gentleman; grave, and kindly, and courteous; a bachelor, and about forty-five or fifty years old”. He also notices that although Mr Blank clearly loved funny stories, he never laughed. By contrast, he made Twain laugh frequently – “and this was very trying – and very pleasant at the same time – for it was [always] at quotations from my own books”.

When the stranger finally drops his bombshell, first producing one of the club’s sumptuously monogrammed letters to jog Twain’s memory, then confessing his deception, including the reports that had taken him two weeks each to write, his only excuse is that he has never had to work for a living and had a lot of spare time.

The astonished Twain knows he should be angry but is not. Instead he can only admire “the most ingenious and laborious and cheerful and painstaking practical joke I have ever heard of”.

We might suspect that Mr Blank was himself an invention, except that Twain also credits him with a role in another mystery that is better documented. That one centres on a letter his wife received in the late 1870s, announcing the sad news that her husband had died while visiting Australia.

The credibility of this claim was somewhat undermined by the fact that Twain was not in Australia at the time; he wouldn’t get there for another 15 years. But at least one newspaper had wrongly reported that he would be visiting. And it seems there then arose an imposter who, taking advantage of the Twain deficit (in an era when his name was better known than his face), played the part.

While the culprit has never been identified, a prime suspect was an American actor who was found dead in Melbourne one night in 1879, after a drunken fall (or assault).  Reports of Twain’s phantom appearances ceased after that. But as for the letter to his “widow”, that too was part of Mr Blank’s confession. “I don’t know why [I did it],” he told Twain. “I was always sorry about it afterwards.”