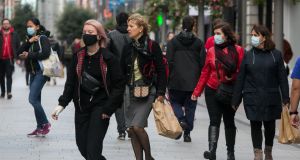 Henry Street: In the months ahead, it will become clear a lot of jobs will not be coming back and a lot of businesses will close. Early 2021 could be tricky. Photograph: Gareth Chaney/Collins

The latest economic forecasts show the extraordinary nature of the budget challenge. The Government has to manage two economies with one budget. On one side, the unemployment rate is set to average almost 16 per cent this year and stay in double figures well into next year.

On the other, exports from the pharma and digital sectors are soaring and the resulting tax revenues will cut the expected deficit significantly this year – perhaps to more like €20 billion than the earlier anticipated figure of up to €30 billion.And we also see more than €7 billion extra flowing into people’s savings accounts this year as many see their income unaffected, but their ability to spend limited.

So the job of the two Ministers, Paschal Donohoe and Michael McGrath, on October 13th is to keep the show on the road in the healthier parts of the economy while continuing the rescue mission for the worst-hit sectors, some now facing a deeply uncertain future.

Let’s look at the damage first. Ignore the gross domestic product figures for a moment and consider that on average 300,000 fewer people will be at work this year. This is 14 per cent fewer than the number of people at work in 2019. And next year, while job numbers are expected to be on the rise again, the unemployment rate will still be north of 10 per cent.

Expectations for growth next year have been pulled right back due to Covid and Brexit fears. A Brexit trade deal, which could still happen, would help. For now a hoped-for bounceback in growth in2021 looks much more modest. And Donohoe warned this week of the risk of a series of ups and downs as restrictions come and go – a kind of shark tooth recovery of highs and lows which could have a wider impact on confidence.

This is worrying and the economic rescue job is far from finished – a particular challenge is to look at how to help younger people find jobs, or hold on to the ones they have. There will, in the months ahead, be a bit of a reckoning when it becomes clear that a lot of jobs will not be coming back and a lot of businesses will close, probably including a few big ones. Early 2021 could be tricky.

The better news is the stronger-than-expected performance of the export sector and in particular the pharma sector, where a remarkable surge in exports has supported the gross domestic product data. Computer services are also doing well. This is why the forecast fall in GDP this year of just 2.5 per cent is so modest. As we saw again in the exchequer figures for September, corporate profits and better-paid jobs are definitely supporting taxes.

And much of the rest of the economy trundles on. Those who have been hit have been hit really hard, but for the majority income has not changed much. As people can’t go out and spend as normal, or go on holidays, savings have surged. The latest CSO data shows an extraordinary rise in savings to about 35 per cent of income in the second quarter of this year – it’s normally in the mid-teens. Remarkably, household disposable income remained steady in the second quarter, a reflection of the fact that many people did not see incomes fall – and also the emergency State income and job supports helped those in trouble.

You would be worried about the economic damage spreading more widely if the crisis drags on. Business hopes early this year that 2021 would see some kind of return to normality may be dashed. There is increasing talk around Government and more widely of new ways to find a balance between health restrictions and the economy, though as of yet no one has worked out how and the National Public Health Emergency Team continues to call the shots.

So what can the budget do? Part of the job will be to carry on spending and borrowing – the virus threats looks set to continue and so Government spending to limit the damage and fill the hole left by less private sector activity remains vital.

Timing the run-down in the general State supports and putting in place the more targeted ones likely to replace them is a big job – the budget will likely give some pointers here and leave a contingency fund to help pay the bills, but much will depend on how the virus story plays out.

This is a politically explosive issue for 2021. There are really difficult issues about the shape of ongoing supports for businesses and how and where they should be directed. A lot depends on your assumption of how long we will have to live with the worst of the virus and what the world will look like afterwards.

So this won’t be a normal budget. There are indications of no general pension increases or income tax changes – both appropriate given that much of the population remains unaffected financially. Resources need to be focused where they are most needed, especially to help younger people get back to work with a major programme of training and jobs placement.

One of the trickiest issue will be how to underpin confidence. And how to get some of the money now flowing into savings accounts to be spent. Not much point, given the environmental imperative, in encouraging people to buy a new diesel SUV. But we might expect moves on electric vehicles and on incentivising people to consider retrofitting their home.

Confidence will be key. With the virus still circulating , getting people to spend may be difficult – and businesses will be wary of investing. Managing the pandemic remains central. Recessions spread and deepen because people stop spending and businesses slow investment. As well as rescuing the worst-hit, bolstering confidence in the rest of the economy will be a vital task for the budget.