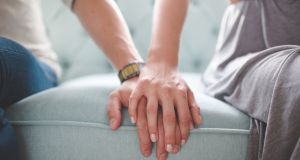 “It involved young couples going to bed together, with certain precautions for chastity, up to and including boarded partitions, as a trial run for marriage.” Photograph: Getty Images

When we speak of “bundling” today, it usually refers to the sale in groups of computer products or services, typically including broadband.

But the word used to have a more intimate meaning in these islands and in the Netherlands (where the custom seems to have originated). Back then, it involved young couples going to bed together, with certain precautions for chastity, up to and including boarded partitions, as a trial run for marriage.

The tradition later crossed the Atlantic to New England, where Washington Irving mentioned it in his writings. Indeed, in Francis Grose’s Dictionary of the Vulgar Tongue (1785), it is attributed only to the US and blamed on an alleged shortage of furniture there, viz: “Bundling: A man and woman sleeping in the same bed, he with his small clothes, and she with her petticoats on, an expedient practised in America on a scarcity of beds, where, on such an occasion, husbands and parents frequently permitted travellers to bundle with their wives and daughters.”

But back in Ireland, in 1775, a travel writer named Richard Twiss suggested the pre-marital practice lingered in Ulster at least, specifically Fermanagh.

And quoting him and other sources, the 20th-century geographer and folklorist E Estyn Evans said it had once been well known in the north-eastern counties.

There, as in “Wales, the Hebrides, Norway, and Holland,” Evans added, it was an accepted preliminary to marriage “and a means by which the fertility of a prospective partner was tested”.

This last detail might imply a certain strain on the precautions for chastity, occasionally. So would a rude English verse from the era: “A bundling couple went to bed/With all their clothes from foot to head;/That the defense might seem complete/Each one was wrapped in a sheet/But oh, this bundling’s such a witch/The man of her did catch the itch,/And so provoked was the wretch/That she of his a bastard catch’d.”

But there was none of that in Ireland, apparently, at least according to Twiss. Declaring the women here to be “remarkably prolific”, he cited the example, again from Fermanagh, of “a clergyman and his wife” who in 29 years together had produced 32 children. Of the Irish in general, he added: “This fruitfulness may be ascribed to their early marriages, and to the want of opportunity of indulging themselves unlawfully.”

Elsewhere, in one of his footnotes, Twiss also made a point about the sexual prowess of Irishmen. It was so indelicate he felt the need to write it in Latin. But even with my limited understanding of that language, it sounds flattering to the local men and explained why there was so much “coitus fecundus” going on.

Despite this and other blandishments, Twiss did not endear himself to his hosts. He had plenty of less flattering things to say too and his politics were unenlightened even by the standards of the time.

Such was the poverty of the Irish, he wrote, “they seem to form a distinct race from the rest of mankind”. But the sight a road-side hedge school of ragged boys somewhere provoked him only to reflect, “it would be better that the lowest classes of people throughout Europe were neither taught to read nor to write, these acquisitions only creating new wants and exciting new desires which they will be seldom able to gratify”.

On a less serious note – some women may disagree – he remarked elsewhere that the most obvious physical distinction of the natives was “the thickness of their legs, especially those of the plebeian females”. For that and other outrages, he became a target of criticism in Ireland. And not just of criticism. Thanks in part to its rhyming potential, the writer’s surname also ended up in Grose’s Dictionary (an 1811 edition), viz: “Twiss. (Irish) A Jordan, or pot de chambre. A Mr Richard Twiss having in his ‘Travels’ given a very unfavourable description of the Irish character, the inhabitants of Dublin, by way of revenge, thought proper to christen this utensil by his name [..] Suffice it to say that the baptismal rights were not wanting at the ceremony”.

One manufacturer of the vessels even added a portrait of the writer to the bottom of his products, to encourage better aim. Meanwhile, Grose’s book also recorded a verse that a waggish friend of the Twiss family wrote to celebrate this unusual form of immortality: “Perish the country, yet my name/Shall ne’er in story be forgot,/But still the more increase in fame/The more the country goes to pot.”