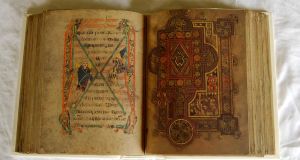 It comes as a shock to learn that the Book of Kells, that immortal masterpiece of religious art, was also used on occasion as a sort of real-estate register – a place to record some of the more important land deals of ancient Ireland, alongside the illuminated Gospels.

What would now be considered literary vandalism was acceptable practice in the 12th century. It may have been justified partly as a way of guaranteeing transactions, by conferring them with “the permanency of divine sanction”, as one scholar put it.

But our distant forefathers were in general less precious than us about writing in the margins of books, whose white spaces they saw as communal noticeboards. In any case, no fewer than 12 such additions made it into the priceless work now housed under glass at Trinity College Dublin.

I owe this revelation to a somewhat more modest volume, Tigernan Ua Ruairc and a Twelfth-Century Royal Grant in the Book of Kells, by Denis Casey, one of an autumn windfall of publications from the Maynooth Studies in Local History series which landed in my letterbox recently.

As the title suggests, Casey’s study looks at one of transactions recorded and at its chief protagonist, a slippery Cavan man who was King of Bréifne for decades before the English arrived in Ireland and was so adept at extending his interests southwards that the invaders also considered him King of Meath. His durability was itself remarkable, Casey writes: “In an age when kings could be inaugurated in the morning and knifed and buried by sundown, Tigernán Ua Ruairc’s 50-year reign over Bréifne (c.1122 – 72) is worthy of note for its longevity alone.”

But he was also notably talented at building up his lands. So the question arises, even without the prompting of certain latter-day stereotypes involving Cavan people, as to why a notoriously expansionist monarch from those parts would voluntarily surrender a big chunk of Meath farmland (known as Mag nDechrad), albeit to the church.

As recorded in the Book of Kells (and translated from the original Irish), he offered the large triangle of property east of Slane “as a perpetual alienation to God and to Columcille from himself and from every king that shall take Bréifne for ever”.

And piety may well have been some of the motivation. So may have been a need for atonement. An “arch-opportunist” who negotiated the many internecine feuds of 12th century Ireland by switching political allegiances “approximately 16 times”, he must have had much to atone.

But his talent for realpolitik probably extended to the grant of land too. In such transactions, Casey notes, quoting an earlier scholar, “the magnanimity of the dynasty that is rapidly losing power” is often noticeable, since “giving land to the church was one way of preventing it from falling into the hands of one’s opponents.”

In other words, Ua Ruairc may have been donating something he probably would not own for much longer anyway, and in the process having his largesse recorded on the early version of a church plaque.

At least the profane marginalia in the Book of Kells do not distract much from the main work. Occasionally, by contrast, doodles have become more famous than the book itself. A classic example is the poem Pangur Bán, written by a bored ninth- century Irish monk working the late shift in a scriptorium in what is now southern Germany.

He was distracted from his supposedly more important tasks by the doings of his cat. Then he noticed the similarity between the animal’s vocation – catching mice – and his own: catching glimpses of the meaning of life in or between the lines of books. And in eight, four-line verses, he let the thought run away with him.

Nominating the poem (via Robin Flower’s loose translation) as her choice for the Wesley College anthology Lifelines (1997), the writer Moy McCrory commented: “Its simple, lyric quality and its clearness gives it a childlike simplicity which is deceptive. You can’t hear it without being whisked back in time. The listener shares the scriptorium with the frozen scribe, who finds his mind wandering late in the night, watching his white Pangur chase mice.”

Oddly enough, the cat is now more famous than the monk, whose name we still don’t know. But both are more celebrated than the text on which he was working. That only helped immortalise the doodle.

As McCrory added, the monk’s “final irreverent gesture” was to write his verses “down the side of St Paul’s Epistle”, making them simultaneously “profane […] and sacred”.