Philip King: Ireland needs to listen to other voices

Culture and technology can help secure futures on our geographical periphery 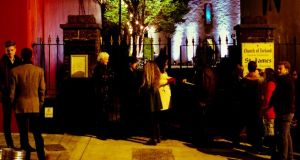 “We’ve helped to road-test technology to enhance the experience of live streaming, and this allowed us seriously to look at extending the reach of our main-stage events at St James’s Church.”

Other Voices was an idea born out of a conversation that turned into a festival that takes place at the edge of Ireland. That was 2002. Now it’s 2017 and my how it has grown.

Other Voices, its singers, writers, musicians and audiences placed Dingle and west Kerry in the foreground long before the Wild Atlantic Way was ever heard of. In the years before we had social media, RTÉ television and word of mouth helped put us on the global cultural map.

My fondest memories of those early days are of the people who started coming to Dingle to make music – Glen Hansard, Lisa Hannigan, Interference, Amy Winehouse, The National, Elbow and many more, and of those people who came to the little church of St James to hear them. Since Other Voices began, we have navigated periods of enormous and rapid change in technology and behaviour.

The Dingle peninsula and Corca Dhuibhne are places steeped in music and culture and have attracted musicians and artists for centuries. It’s the absence of certain things, as much as the presence of certain things, that can make and keep places special, rare and worth the journey. Dingle is much more than a destination and, like other culturally very rich Gaeltacht and rural communities along the western seaboard, it needs to be understood and nurtured, not simply promoted and marketed. It’s really important these days, when authenticity is such a powerful motivator of peoples’ choices and decisions, that we tell our story using a narrative that is authentic and credible.

The idea is to use these uniquely significant characteristics of our culture and our place to design a new and better approach that more accurately reflects the attractive complexity of Ireland, the advantages of doing business with Ireland and the confidence to be Irish wherever in the world you are.

Like many rural areas in Ireland, Dingle is challenged by various kinds of migration. The story of our music mirrors the story of migration, the losses and the gains, the opportunities, the unpredictability of creative and cultural collisions. Other Voices happens in a place that many of our young people have to leave in order to find work, while for those who can stay the availability and cost of a place to live is a major barrier. This is also a problem for the people who work in the tourism business in Dingle and it’s no exaggeration to say that we’ve seen the emergence of a commuter belt around Dingle and its hinterland in recent years.

We need to make sure that factors in addition to the economic or financial are steering Ireland’s tourism strategy and policy. Tourism’s goal must be to benefit and enrich, rather than simply extract benefit from, our local communities and their special, magical places, the unique natural resource of our landscape and our vibrant imaginations.

If the resources and potential of the tourism industry remain focused principally on indicators such as arrivals numbers and bed nights, how does this get translated into sustaining and helping the aspects and elements of Ireland that attract people here in the first place.

Tourism is likely to remain a powerful influence in our place and we have a good sense of the risks and benefits. On the other hand, technology, and specifically the provision of good, reliable broadband is helping us to reposition Other Voices and Dingle in the world for the long term.

Other Voices is an event that has moved in step with developments in technology. We’ve worked with industry leaders to test new ways of using technology to disseminate the digital content that we create and capture each year in Dingle. We’ve helped to road-test early versions of technology to enhance the quality and experience of live streaming, and this allowed us seriously to look at extending the reach of our main-stage events at St James’s Church, which seats about 80 people.

As musicians, artists and producers we feel as close to the cutting edge of today’s technology as our predecessors did in early 20th century America where the global music industry was born, with many Irish creative entrepreneurs in the mix. This picture of the commingling of technology, migration and music is what has inspired us to establish our annual conference Ireland’s Edge, which we began in 2015. We want to reshape the way we think and talk about the Irish abroad and the diaspora, and we want them to think and talk differently about Ireland.

Being here at the edge of Europe gives us an interesting perspective. The edge is a place with a unique vantage point on the centre, it’s a place from where unique questions can be asked of developments at the centre.

Developments in technology and economic models mean traditional concepts of work, job and career are being destabilised or overturned. If you want to see how individuals and small organisations show agility and resilience, practise lean production and just-in-time management techniques, and leverage maximum value from limited and dwindling resources, then the creative community is a good place to start looking.

Since our first Ireland’s Edge conference in 2015 we’ve seen significant changes happening around us. Some of these are easy to understand, such as the Creative Ireland initiative. Others are more impenetrable, such as the meaning and implications of Brexit and the Trump regime in the United States. We still believe Ireland has opportunity and advantage in this environment if we develop and implement policies that create the space for creativity, culture and the arts to thrive across all sectors.

If Ireland can adapt its way of working so that it has a more integrated strategy and policy, grounded in the boundless potential of creativity, we can take advantage of the competitive edge that this represents for us here at home and globally.

Culture remains the strong and welcoming link, when many others have been severed, between the home tribe and the Irish diaspora. We believe that we have much to learn from the innumerable Irish artists who have successfully navigated this gap professionally and commercially, and perhaps with more nuance and skill than many other segments of the population, including industry and development. All of these points combine to create key differentiating factors for Ireland compared with other small countries of the world.

Ireland’s Edge 2017 also deals with our relationship with the Irish abroad and the Irish diaspora. Our understanding of emigration and migration needs to be more nuanced and practical, and we’re going to challenge our assumptions and thinking. We’ll do this against the background of Brexit and the current environment in the US under Trump.

Ireland’s Edge 2017 connects this issue with developments in technology, innovation and the role of creativity in the next industrial revolution which is happening around us right now. What are the ethical and moral issues? Which skills will rise in value and significance as automation encroaches further and further into daily life and work? Are there particular attributes in Ireland that make us more agile, resilient or adaptable? What is it about Ireland that will make it more attractive as a place to return home to, or to invest and create employment?

We’re going to hear from a remarkable group of thinkers, researchers, creators, policymakers and artists as they wrestle with these questions. So come west along the road and join us in Dingle – it’s cooler at the Edge.

Philip King is director of the Other Voices festival and co-founder of the Ireland’s Edge conference, which take place in Dingle from December 1st to 3rd