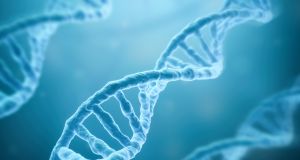 Ireland needs to join the growing number of countries performing national public genome projects. Our European neighbours in Finland, Denmark, Estonia and England have already embarked on such projects, as have countries like the United States and Japan, with Dubai the most recent to announce that it is joining this pioneering group.

The investments being made are substantial. Finland, whose population is closest in size to Ireland, is investing €59 million. The English 100,000 Genomes Project invested £300 million initially, Estonia has already spent €12 million, while Germany has allocated €360 million for a personalised medicine initiative involving the generation of genomic information from its citizens.

11 ‘Doug and Kamala together are almost vomit-inducingly cute and couply’: The VP’s stepkids speak

17 What’s the story behind the mystery of Easter Island? It’s not set in stone

18 ‘Brexodus’ of jobs from City of London to continue, says EU commissioner

19 Cold and working from home? How to stay warm without whacking up the heating

20 The night-time noise in my house is giving me sleepless nights. What can I do?

23 ‘I got a burning smell in my nose’: Third-wave Covid-19 patients share their experiences

25 Focus intensifies on impact of tiny plastics on human body

26 Q&A: Can I still pass Covid on after I’ve been vaccinated?

28 ‘The hellhole says goodbye’: Glee and relief in Europe as Trump departs

31 What are Joe Biden’s Irish roots?

35 Kamala Harris is about to make history. So is her ‘big, blended’ family

36 Baked spuds get a tasty, crunchy filling and topping