Fintan O’Toole: Repeal supporters must not treat No voters as freaks

Ireland is too ambiguous to sustain culture wars. Post-vote, we need to win the peace for social justice 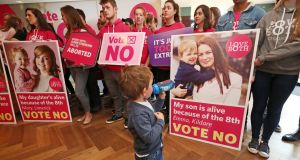 Two-year-old Rossa Maloney looks at his picture with his mother Emma in a Love Both rally in Dublin, ahead of the referendum on the Eighth Amendment Photo: Niall Carson/PA Wire

Two images came to mind over the weekend, one old and one very recent. I remembered passing the National Boxing Stadium on the South Circular Road, Dublin on a bus in 1982. People were going in to the stadium for a big rally in support of what would become the Eighth Amendment to the Constitution.

There were middle-aged country men in shiny suits with Brylcreem-ed hair. There were women in elaborate frocks, some with rosary beads in their hands, some carrying pictures of embryos in lurid colours. My then girlfriend turned to me and said: “Would you look at those freaks!” I replied: “No, no, you don’t understand. We’re the freaks. They’re the normal people.”

I also remembered the weekend before last when I was at a huge humanist funeral for Tom Murphy in the round room of the Mansion House in Dublin. It was a wonderful send-off for a great man with not a priest in sight and no religious rituals. Murphy, moreover, expressed more powerfully than anyone else the sheer rage engendered by being on the outside of a church-dominated Ireland, with all its phony respectability and hysterical conformity. There were songs sung throughout the service by the gorgeous tenor Patrick Hyland, songs that Murphy himself sang and loved. And what was the first song? The gentle 19th century Catholic hymn to the Virgin Mary, Queen of the May:

I didn’t sense that anyone thought it an odd serenade for the occasion.

For many of us, Saturday was the first day of our adult lives in which we felt fully like the normal Irish

I offer the first image as a consolation and a warning. It might be some small consolation to those who voted No on Friday to be reminded that many of us Yes voters know very well what it’s like to be them. Friday’s vote was almost eerily accurate in its reversal of 1983, the old two-thirds becoming the new one-third and vice versa. I know what it feels like to be in the minority, to be on the receiving end of a democratic hammering. I know that mixture of abjection and alienation, when the country you love and the people you care about go in one direction while you’re going in another; when your own deepest values are profoundly out of kilter with those of your compatriots. I know what it’s like to be the freak.

And that knowledge might also carry a small warning against revenge. For many of us, Saturday was the first day of our adult lives in which we felt fully like the normal Irish. That’s a fine feeling and God knows we’ve waited long enough for it. It is worth savouring. But let’s not do to them what they did to us.

We shouldn’t need there to be freaks in order to make the rest of us feel normal. The No voters must be allowed to be normal Irish too. It is true of course that mutual respect can really take hold only when everybody accepts that a republic cannot be in the business of enforcing religious or ideological orthodoxies, however passionately held, on the private lives of others. It is true that people of faith have to get used to walking their own spiritual path without the aid of the crutches of coercive laws. But the great triumph of the referendum is that we did it without becoming tribal – tribal triumphalism would betray that achievement.

Ireland has resisted the far right, and did so again on Friday, because most of us instinctively know that

I offer the second image merely as a reminder that there is no zero-sum game being fought out between religious and irreligious Ireland. An awful lot of deeply religious people in Ireland enthusiastically accept that they live in a pluralist democracy. They don’t think of their religion as necessitating control of politics, of the law and of public institutions like taxpayer-funded schools and hospitals. They are – even if they do not like the word – contentedly secular.

Conversely, an awful lot of Irish heathens are aware of and moved by the very long and deep religious culture that has shaped this society for good as well as for ill. We don’t regret for an instant the stark loss of influence of authoritarian, anti-democratic and patriarchal institutions, but we welcome it, not because those institutions were religious in form but because they were authoritarian, anti-democratic and patriarchal.

Culture wars are no better than real ones – nobody really wins them. Ireland has resisted the far right, and did so again on Friday, because most of us instinctively know that.

The Eighth Amendment was a culture war project, a pre-emptive strike that weaponised abortion. It was doomed to failure because Ireland is too steeped in ambiguity and contradiction to sustain such absolute conflicts. It is too double-minded for these single-minded crusades.

There are diehards on the No side who will, like Japanese soldiers who were still being found in remote jungles in the 1970s, go on fighting the war. Let them. The real business is not to fight culture wars but to win the peace for social justice, equality and dignity and for a republic in which we’re all entitled to be a little bit freakish but none of us is made to feel like a freak.