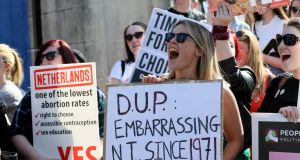 Pro-abortion protesters hold placards during a demonstration calling for abortion to be legalised in Northern Ireland, outside Belfast city hall in Belfast. Photograph: Paul Faith/AFP/Getty Images

A great quote has been unearthed by campaigners for abortion reform in Northern Ireland, showing that in 1992 future DUP leader Arlene Foster (then Kelly) spoke for a motion at the annual conference of the UUP’s youth wing.

“A few examples include the Republic’s stand on divorce and abortion . . . we must expose the Republic’s Constitution for all that it is; an archaic crutch to the Roman Catholic Church.”

Foster has since changed her stance on abortion and cross-Border political interference, at least in a northward direction. But let us be kind enough to note it has taken her 26 years, a switch of party and a rollercoaster of fortune to do so.

The SDLP, by contrast, has managed a similar journey in a week.

It still has the same pro-life policy on abortion as the DUP and only permitted members to oppose the policy as a mater of conscience as of May 19th, yet already leader Colum Eastwood has called for a “fit for purpose” abortion law so that “the days of exporting this issue are brought to an end”.

Sinn Féin supports repeal of the Eighth Amendment but was arguing over this as recently as six months ago, still rejects the Irish Government’s proposed legislation and only backed abortion in cases of rape and fatal foetal abnormality in 2015.

Yet suddenly Sinn Féin is such a champion of liberalisation it seems to think it won the referendum and owns the associated social and political momentum, which will carry it into government.

So confident of this is leader Mary Lou McDonald that she left the New York Times convinced she will become the next taoiseach, in an interview published on the day of the vote.

An Alliance Party Bill to legalise abortion in Northern Ireland for cases of rape and fatal foetal abnormality, in line with Sinn Féin’s policy, was laid before Stormont in December 2016 but Sinn Féin crashed devolution days later because it was not getting enough “respect”.

The last time the Assembly had a chance to vote on the same policy, via Alliance amendments in February 2016, the UUP allowed a conscience vote, the SDLP denied fatal foetal abnormality could be diagnosed and the amendments failed by a substantial outright majority, meaning there was no sectarian divide or single-community veto.

Going back a little further, to 2008, the decade-long bill of rights consultation under the Belfast Agreement concluded that abortion is not a rights issue and could only be addressed through the Assembly, following what the Human Rights Commission called “forceful” submissions from nationalist and unionist parties.

Yet as of last Friday, according to nationalist parties, abortion is both a rights issue and a democratic imperative, being denied by the dinosaurs of the DUP thanks to a sectarian unionist veto.

Ironically, throughout the whole of Northern Ireland’s existence until last Thursday, opposition to abortion was considered a rare point of cross-community agreement.

Any suggestion of Westminster imposing legislation was felt to be particularly unacceptable to nationalists, as it would bring contested British sovereignty into conflict with Catholic doctrine. So London never dared – and unionists never asked.

So urgent is it to have Dublin’s abortion law imposed on Northern Ireland that Sinn Féin, which does not support that law, nevertheless believes it justifies a Border poll.

Appearing on ITV, party vice-president Michelle O’Neill explained that the referendum result was a “constitutional issue” that will cause “people from a unionist background to have a conversation about where they see themselves in the future”.

It should be easy for O’Neill, as a champion of parity of esteem, to picture that conversation. The likelihood of unionists voting “Yes” to a united Ireland due to repeal of the Eighth Amendment is exactly the same as the likelihood of O’Neill voting “No” to a united Ireland due to the passing of the Eighth Amendment, or even less so, given that from a unionist perspective this is all happening in a foreign country.

Unionists are foreign to the Republic as well, of course, which makes the rush to judge the DUP look more like ignorance than opportunism.

That does not explain the volume of southern sneering at the Grand Lodge of Ireland in Dublin.

Naturally, the Orange Order opposes abortion – it is an evangelical Christian organisation.

Many in Northern Ireland detest the order for its contentious marches, although the last of those was resolved in July 2016, as this was apparently an easier problem to crack than abortion.

But is the Republic’s approach to Orangeism not about relaxed days on the beach in Rossnowlagh, Bertie Ahern and Ian Paisley exchanging gifts at the Battle of the Boyne site, and everybody just getting along?

Imagine an Ireland where there were enough unionists, led to expect enough influence, to slightly alter or even briefly delay a major political decision.

Now there would be a constitutional issue.

1 Teenage boy dies at Powerscourt Waterfall in Co Wicklow
2 Fresh investigation into the murder of Michaela McAreavey in Mauritius
3 ‘I wandered around Dublin wondering: Is this what they call a capital city?’
4 ‘There were times I had to step outside to hide my tears, take deep breaths and then carry on’
5 Coronavirus: 50 new cases as Glynn says phase four delay disappointing for many
Real news has value SUBSCRIBE