Venezuelan oil flows freely only in contraband sales across border 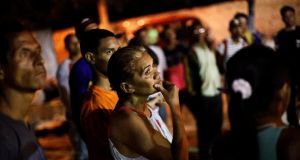 A Venezuelan woman prays on a soccer field on the outskirts of Cúcuta, on the Colombian side of the Venezuelan border. Photograph: Edgard Garrido

Once you pass the army base in Agua Blanca on the highway north out of Cúcuta the roadside stalls quickly appear.

Consisting of stacks of jerry cans and other containers of various sizes, they are improvised petrol stations, offering cheap, powerful, contraband Venezuelan petrol and diesel to the motorists of Colombia’s border department of Norte de Santander.

The “tankers” that supply them are men on motorbikes that operate along the road, some of them with 10 or more jerry cans precariously stacked high on the backs of their bikes. At Agua Clara they take to back roads to avoid passing the village’s police station but otherwise there is no effort to hide this illegal commerce.

In this bucolic region of cattle ranches and flooded rice fields, the trade in contraband fuel centres on the border town of Puerto Santander, about an hour north of the regional capital. Its bridge with Venezuela is another entry point for desperate Venezuelans seeking the food and medicines they can no longer find or afford back home due to the crisis there.

Though the numbers crossing the single-lane bridge are fewer than in Cúcuta, the scene is more chaotic, with few of the humanitarian or medical facilities in place that can be seen back in the capital.

This lighter state presence makes the town attractive to smugglers, and police patrolling it warn against hanging around too long or taking pictures.

For roadside fuel sellers like Margarida the business is a good one. She used to make €3 a day working as a maid for a local family, taking care of three children. Now, selling contraband petrol on the highway, she takes home €10 a day for easier if smellier work, pouring the fuel into a cloth-lined funnel which she jams into the tank of her customers’ cars.

For them the savings compared to buying a litre at a regular petrol station can be over 15 per cent, and in reality more, because Venezuelan petrol has a higher octane rating than its Colombian competitor.

Margarida (not her real name) has to pay a “tax” to the local Colombian paramilitaries than oversee the trade on this side of the frontier but this buys her peace of mind – even the local police do not bother her. “It is normal here. No one thinks anything of it,” she says as police cruise by her stall on motorbikes.

This frontier region has long had a thriving contraband trade, especially in fuel. Venezuela has the cheapest petrol prices in the world. It is more expensive to buy a bottle of water than to fill up a gas-guzzler there so the mark-up to be made by getting fuel into Colombia is too attractive to pass up in a region with a deeply entrenched tradition of smuggling.

When Puerto Santander’s bridge was still open to traffic, the illicit trade took place in cars converted into clandestine tankers. But since Venezuela closed it to all but pedestrians in 2015 it is now brought over the Táchira river in boats.

In the town no one has any doubt about who controls the trade on the Venezuelan side of the frontier – a colonel in the country’s military. “It is officials doing business on the side. They control it,” explains Margarida, who bursts out laughing before an emphatic no when asked the colonel’s name.

This trade, which legal fuel distributors in Norte de Santander estimate robs them of 40 per cent of their business, is another example of the criminalisation of the Venezuelan state under the Bolivarian revolution of Hugo Chávez and his successor and current president Nicolás Maduro. The country is the now most corrupt in Latin America and 12th in the world, according to Transparency International, an NGO that tracks corruption worldwide.

High-ranking officials in key ministries and the security forces have been allowed enrich themselves in myriad illicit schemes even as the country’s economy crumbles, so long as they remain loyal to the regime. In a report published last year, InSight Crime, a non-profit that tracks organised crime across Latin America, identified 123 high-ranking Venezuelan officials involved in a wide range of criminal activity.

“With so many state actors with interests in criminal activity, be it fuel smuggling, the black market sale of food and medicines or the trafficking of cocaine, this factor alone suggests that Venezuela qualifies as a mafia state,” the investigators wrote.

The free availability of contraband Venezuelan fuel in Norte de Santander is in sharp contrast to the situation across the border in the Venezuelan state of Táchira. While fuel from their country is openly on sale in Colombia, residents in the city of Ureña, many showing photos and videos on their mobile phones as evidence, report petrol stations closed with long queues quickly forming when they do receive supplies.

Such is the chaos into which the country’s economy has descended under Chavismo that, despite owning the world’s largest oil reserves, Venezuela has for years suffered fuel shortages. This not only means no petrol at the pump but frequent blackouts as electricity generators run out of diesel.

The contraband trade is only part of the problem. Venezuela’s refining capacity, once among the largest in the world, is now so degraded the country had to import petrol and diesel from the US until Washington imposed oil sanctions last month, as part of its bid to force Maduro out of power in favour of opposition leader Juan Guaidó who declared himself interim president last month.

Russian companies have sought to fill the gap but industry executives in Venezuela say there is only several weeks’ supply now left in storage. “As a citizen, if you ask me why we are in this situation I would have to tell you because the state failed to maintain our refineries as necessary,” says César Parra, head of the Venezuelan Oil Chamber of Commerce in the oil-rich state of Zulia.

As the US was the last significant foreign buyer paying hard cash for Venezuelan oil exports, the sanctions were seen as an attempt to deliver an immediate knock-out blow to the cash-starved and deeply-indebted Maduro regime. But it is seeking barter deals to replace the business lost to US sanctions with the country’s oil minister in India last week trying to find new customers. But many analysts believe such efforts will at best only partially compensate.

“They are definitely looking for every creative solution they can. They are not just sitting there waiting to see what happens,” notes Lisa Viscidi, energy programme director at Washington think tank the Inter-American Dialogue. “It’s just I don’t know if what they are doing is enough to completely get around the sanctions.”