Trump now in obese range but in ‘good overall health’ 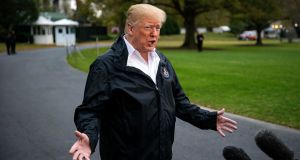 US president Donald Trump’s doctor said: ‘it is my determination that the president remains in very good health overall.’ Photograph: The New York Times

US president Donald Trump has gained weight over the past year and is now in the obese range, although he remains in “very good health overall,” according to results of an annual presidential physical examination conducted last week.

Mr Trump, known for his love of hamburgers and well-done steaks and an aversion to the gym, was warned by his doctor last year that he needed to change his diet and start to exercise.

The added pounds pushed Mr Trump’s body mass index into the obese category, which increases the risk of heart disease and is associated with a higher risk for cancers.

“He’s definitely carrying too much weight,” said Dr Matthew Sorrentino, a preventive cardiologist at the University of Chicago Medicine.

“After taking into account all the laboratory results, examinations and specialist recommendations, it is my determination that the president remains in very good health overall,” his physician Sean Conley said.

While aides said he chose fish over red meat more often during the year, his main source of exercise remained golf.

“His cholesterol levels are not awful, but somewhat high,” said Dr Ranit Mishori, a professor of family medicine at Georgetown University School of Medicine.

Mr Trump’s doctor said he increased his dose of a statin, a drug to reduce cholesterol. Mr Trump’s total blood cholesterol was 196, down from 223 last year.

A breakdown of the president’s cholesterol numbers showed that his high-density lipoprotein, or HDL, the “good” or protective form of cholesterol, was 58, down from 67 last year.

His low-density lipoprotein (LDL), the so-called “bad” cholesterol, was 122, down from 143 last year. High LDL levels can lead to a buildup of plaque in the arteries, which can cause a heart attack or stroke.

“His LDL is still mildly elevated if you look at averages,” said Dr Sorrentino.

Dr Sorrentino said the medication reduces the risk of a heart attack or stroke by “maybe 30 to 40 per cent, but it doesn’t eliminate the risk.

“ You still have cardiovascular risk. We’ve just made that a little bit lower by being on a statin.”

Mr Trump did not undergo any procedures requiring sedation or anesthesia, his doctor said, meaning he did not have a colonoscopy.

The brief memo did not comment on whether Mr Trump had been given a cognitive assessment - the focus of much attention last year, when the White House sought to put to rest questions about his mental fitness for office. - Reuters