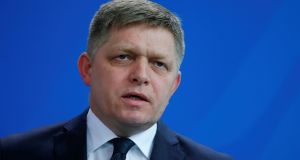 Slovakia could face months of legal uncertainty as a politically charged dispute threatens to paralyse its highest court, compounding concerns for the rule of law in central Europe.

Nine of the constitutional court’s 13 judges end their terms on Saturday and no replacements have been chosen, due to a row caused by controversial former premier Robert Fico’s failure to win a place on the bench.

The court cannot function fully with only four members and Mr Fico, a pugnacious populist who leads the ruling Smer party, now says new judges should be approved only after a new Slovak president takes office in June.

Current Slovak president Andrej Kiska and Most-Hid, a junior party in the ruling alliance, rejected Mr Fico’s candidacy this week, prompting Smer deputies to boycott two votes to fill the court’s vacancies and keep it running normally. Smer also objected to the ballot being public rather than secret.

Smer’s decision to back its leader and hobble Slovakia’s constitutional court fed into fears for judicial independence around the region, as nationalist leaders in Poland, Hungary and Romania seek more control over their law courts.

Mr Kiska said the dispute would also further undermine Slovaks’ faith in their politicians, a year after the still unsolved murder of investigative journalist Jan Kuciak triggered protests that forced Mr Fico and close allies to resign from office.

“The ruling majority failed and made one of Slovakia’s main constitutional bodies dysfunctional,” said Mr Kiska, who described the highest court as “vitally important for the functioning of the country’s democratic processes.”

“Unfortunately, instead of discussing the quality of the constitutional court, Slovakia is now discussing its very existence. That is a result of personal interests and ego being placed above the interests of the country,” he added.

After the terms of nine judges expire on Saturday, Mr Kiska said “the constitutional court will be practically dysfunctional from next week. In this situation, it is the duty of parliament to find a way to choose... candidates to be constitutional judges as soon as possible”.

Mr Kiska has been a strong critic of Mr Fico and Smer, particularly after they tried to ride out public anger over the killing of Mr Kuciak, who reported on corruption in Slovakia and suspected links between political figures and criminals.

When Mr Fico, who has a law degree, scrapped his bid to sit on the constitutional court this week, he said “the new judges should be appointed by a new president”.

He could revive his attempt if European Commission vice-president Maros Sefovic, Smer’s candidate in next month’s presidential election, wins the vote and takes over in June from Mr Kiska, who is not running in the ballot.

Judges on Slovakia’s constitutional court are appointed for a term of 12 years and enjoy immunity from prosecution.