Past votes in Africa’s largest democracy marred by violence, intimidation and rigging 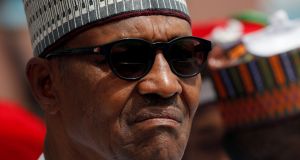 Nigeria’s president Muhammadu Buhari in his hometown Daura, in Katsina State, on Friday ahead of the country’s presidential election. Photograph: Luc Gnago/Reuters

Nigeria bolstered security in much of the country on Friday on the eve of a presidential election in Africa’s largest democracy, where past ballots have been marred by violence, voter intimidation and vote rigging.

The two leading candidates in Saturday’s vote are President Muhammadu Buhari (76), who took office in 2015, and Atiku Abubakar (72), a businessman who served as vice president from 1999 to 2007.

The country, which has Africa’s largest economy, is dealing with pockets of instability: authorities are trying to tackle a decade-long Islamist insurgency in the northeast and communal violence between farmers and nomadic cattle herders in central states, along with banditry and kidnappings in the northwest.

Dozens of combat policemen and members of other security forces were deployed from police headquarters in Maiduguri, capital of Borno state, which has been worst hit by Boko Haram and its off-shoot, Islamic State in West Africa Province (Iswap).

Military vehicles and soldiers were seen moving toward volatile parts of the state, which has seen an increase in attacks by Iswap in recent months. The group said it carried out an attack on the convoy of Borno’s governor earlier this week.

In Kano, a hotly contested state that is the economic hub of the north, police said at least 15,000 officers would be deployed for the election with a further 5,000 from other services. That compares with just over 10,000 officers on duty on a normal day.

Kano is the most populous state in the northwest, a region that accounts for nearly a quarter of Nigeria’s voters. It has been a Buhari stronghold in the last three elections and his posters outnumber those of Mr Abubakar.

In Adamawa, Mr Abubakar’s northeastern home state where he will vote, a police spokesman said more than 7,500 officers had been deployed, significantly more than the usual number on the streets.

Mr Abubakar spent much of the day in meetings with members of his party in Yola, the state capital of Adamawa.

Mr Buhari worshipped at a mosque in Daura, his hometown in the northwest, which sits near the border with Niger.

Nigeria has more than 84 million registered voters across 36 states and the federal capital, Abuja. Much will depend on turnout, which was less than 44 percent four years ago when Mr Buhari became the first opposition candidate in the west African nation’s history to be elected to power.

“Nobody knows who is going to emerge winner, but in terms of advantages, Buhari has the upper hand,” said Idayat Hassan, director at Centre For Democracy and Development in Abuja. “It goes beyond being the incumbent – the number of votes available in the northwest of the country, which is his main stronghold and has a larger voter turnout, is positive for him.”

Mr Buhar and Mr Abubakar are both northern Muslims in a country roughly split between Christianity and Islam, yet their career paths are widely different. Mr Buhari is a former general who ruled the country briefly in the 1980s and morphed into a civilian politician who won on his fourth try for the presidency four years ago.

Atiku, as Mr Abubakar is widely known, has served as vice president and is a wealthy businessman with 26 children and four wives. Both carry heavy baggage. Mr Buhari and his ruling All Progressives Congress have faced sharp criticism for their handling of the economy. Mr Abubakar has been dogged by allegations of corruption, and many people think he used his past positions in government to enrich himself. – Reuters/Bloomberg