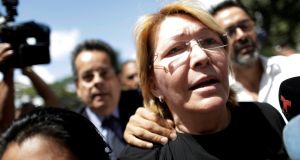 In a dramatic move ahead of a meeting of the new constitutional assembly, which has been given the power to rewrite laws after an election last week that was boycotted by opposition supporters, government troops surrounded Ortega’s office.

Ortega labelled the move a “siege”, tweeting photos of dozens of troops outside her office. “I denounce this arbitrary act before the national and international community,” one tweet read.

The assembly then voted unanimously to remove Ortega and replace her with a government loyalist. As the vote was taking place, pro-government delegates shouted “traitor” and “justice has arrived!”

Ortega will be replaced by Tarek William Saab, a staunch government supporter who currently serves as the nation’s ombudsman.

The move against Ortega followed threats from Maduro supporters in government. On Friday, after being confirmed unanimously as leader of the national assembly, the former foreign minister Delcy Rodríguez said: “The violent fascists, those who wage economic war on the people, those who wage psychological war, justice is coming for you.”

The head of the Organization of American States (OAS), meanwhile, condemned a “flagrant violation” of the prosecutor’s institutional independence. The Inter-American Court of Human Rights, an autonomous arm of the OAS, granted “precautionary measures” of protection for Ortega, saying she faced imminent risk of harm after senior officials linked her to alleged “terrorism”.

Several opposition activists have been jailed in Venezuela, and others are rumoured to be seeking exile. One leader has said his party will field candidates in regional elections despite widespread mistrust of the electoral system.

The country is plagued by hyperinflation (predicted to reach 1,600 per cent by the end of the year), plunging supplies of food and medicine, and spiralling rates of murder and malnutrition. At least 121 people have been killed since anti-government protests began in April.

Maduro has said the new assembly will give voice to those excluded by the political process. His opponents describe a point of no return towards dictatorship.

“There is no humanitarian crisis here,” said Rodríguez on Friday. “What we have is love, what we have is a crisis of the right-wing fascists.”

Maduro has reiterated his support for the armed forces, which have been condemned by human-rights watchdogs for brutally repressing protests. “I feel deeply the wounds of each one of you,” he said before a group of injured national guard troops. “With your bodies as your shield, you have defended the right to peace.”

A number of foreign governments have refused to recognise the national assembly, with the United States levying sanctions. On Friday the Vatican called for Maduro to suspend the assembly.