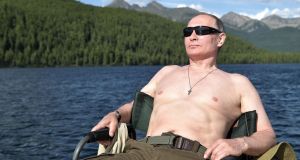 It is the latest stunt for the action man and adventure-loving Russian leader on a mini-break in the Siberian Tyva region.

Footage released on Saturday by state television stations showed Mr Putin steering an inflatable boat and fishing bare-chested with a rod in a mountain lake, accompanied by Defence Minister Sergei Shoigu and other officials.

His spokesman, Dmitry Peskov, said the president spent two hours hunting a pike before finally getting it.

He also accompanied a flock of cranes on a hang glider, shot a tiger with a tranquilliser gun and released leopards into a wildlife sanctuary.