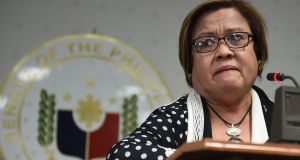 Philippine senator Leila de Lima’s latest prison reading is The Count of Monte Cristo – Alexandre Dumas’s tale of a man who hunts down the people who conspired to have him wrongfully jailed. She laughs when asked if she plans to emulate the protagonist, Edmond Dantès, if she is released from drug-related charges that she says have been trumped up by supporters of President Rodrigo Duterte.

“He exacted revenge on everyone who betrayed him, but it seems there was collateral damage,” she reflects, in an interview at the prison block she shares with about 20 other detainees at the heart of the Philippine National Police headquarters in Manila. “So he felt rather empty in the end.”

De Lima has certainly earned implacable enmity from Duterte for her efforts to probe his bloody drug wars first as a provincial mayor and now as president. She maintains her innocence but also accepts her stay in jail could be a long one. The same day she marks five months in detention this week, Duterte will give an annual state of the nation speech against a background of soaring approval ratings.

“I just have to weather this storm,” says the senator, who has been excused prison uniform and is wearing a colourful blouse and a bracelet she was told was blessed by Pope Francis. “I know it will pass. But I don’t know how long I will be detained here.”

De Lima (57) was arrested at her senate office in February on charges that she received payoffs from jailed drug lords. She has branded the allegations “simply surreal” and said they were part of a “personal vendetta” by a president who is “rather obsessed with me”.

Authorities insist their case is credible and not politically motivated.

The senator first clashed with Duterte as head of a state-funded human rights agency in 2009. She held public hearings on allegations that a death squad operated as part of his anti-drugs campaign as mayor of the southern city of Davao.

Last year, she ran a congressional inquiry into those days and the war on drugs under Duterte’s presidency, in which thousands have died. The president has made conflicting statements on the Davao killings, sometimes denying involvement but at other times boasting of complicity and even claiming to have hunted down targets himself.

De Lima looks healthy and says she has “no complaints” about her treatment, although she only takes food brought by visitors for fear someone could poison her prison rations. The senator’s family – she has two adult sons from a now annulled marriage – have not told her elderly mother she is in jail, so as not to cause distress.

Electronics are banned but that has its compensations: de Lima says she is sleeping better and reading more, including the biblical account of the trials of Paul. She exercises by walking in the compound in which her small and poor-ventilated cell is located, working out with a 7kg dumbbell as she goes. “I have developed abs!” she exclaims.

Her visitors have included Benigno Aquino, the former president, and Leni Robredo, the vice-president who is elected on a different mandate from Duterte and has fallen out with him. But campaigning on her behalf by high-profile figures has been “lacklustre”, the senator says. Nor have there been big public protests about her detention.

The muted criticism contrasts with overseas activity that has included calls by the European parliament and Amnesty International for her release. She rationalises the domestic reticence by saying she is not part of a “political dynasty”, nor a “stalwart” of her Liberal party. She hails from the southern reaches of the archipelago’s main island of Luzon and is a self-proclaimed “neophyte” senator of barely a year’s standing. She trained as a lawyer and built a successful practice specialising in election law, before shifting into human rights.

De Lima predicts eventual public “disillusionment” with Duterte, despite a survey by the Social Weather Stations independent pollster last month suggesting more than three-quarters of people were satisfied with his performance.

The president still has almost five years left in office. It took Edmond Dantès even longer to escape.

“I think as long as Duterte is president, I will be locked up in jail,” de Lima says. “I have no false hopes about achieving justice very soon.” – Copyright The Financial Times Limited 2017