Teeming tourists an ever more important part of national income 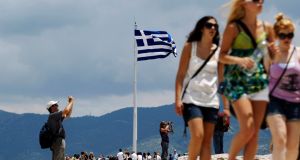 As tourists throng the streets, clamber over the monuments and romp on the beaches, Greece itself is immobile, at the centre of the Balkans where it faces intractable problems with Macedonia and Turkey.

“Macedonia”, the former Yugoslav republic, has been known as “Fyrom” since 1991 because Greece refuses to countenance a new name for it. The reason? “Macedonia” also gives its name to three of Greece’s most northern provinces. So Greece intransigently opposes the adoption of “Macedonia” as the new name for Fyrom (Former Yugoslav Republic of Macedonia).

On one side, Greece’s attitude seems petty-minded. On another, Macedonia’s nationalist claim to recover Thessaloniki, Greece’s second city, as its natural capital, seems unpleasantly irredentist.

There was a time in RTÉ when producers were assigned to an open-ended project known as “Dev’s obituary” – some of them died on the job, so resistant to death was Dev himself. The UN has been trying to broker a deal on Macedonia since 1995. For the past 23 years the negotiator has been Matthew Nimetz; the fact that his name (of Slavic origin) means “one who doesn’t speak our language” does not bode well for his success, but one hopes he survives the ordeal and enjoys a long life.

With Turkey, the problems are twofold: first, Turkey’s claim to the islands that were transferred to Greece between 1923 and 1947, principally Rhodes, Kos, Lesbos, Chios and Samos, but also many other tiny islands, most of them uninhabited.

International law indicates that ownership of these islands is a grey area that would put EL James to shame. There is a mismatch between the concept of Greek territorial waters and Turkey’s continental shelf, and another between designations of national airspace. Twice – in 1987 and 1996 – Greece and Turkey have been on the brink of war over ownership of the islands.

Overflights in Greek airspace by Turkish fighter planes is a regular provocation that has escalated with the growing authoritarianism of Turkish president Recip Erdogan, who wants to rescind the treaties governing ownership of the islands. The most recent incident occurred when the helicopter carrying Greek president Prokopis Pavlopoulos on a tour of some of the disputed islands was threatened by Turkish military intervention.

The issues are not, in fact, about the islands themselves but the huge oil and gas deposits on which they sit. If Turkey could control those deposits, its financial condition would be healthy. Predictably, Greece feels the same. Greek exploitation of these and other, disputed, fields would pay off the national debt faster than you can say “pipeline”.

Oil and gas are also the present-day cause of friction between Greece and Turkey over Cyprus, since Turkey continues to threaten Cyprus’s exploration of its oil and gas deposits in a dispute, yet again, over territorial waters.

In the 1950s Cyprus, at that time a British colony, strenuously tried to join the Greek state. When that failed, and the British withdrew, Cyprus became an independent republic and, since 2004, is a member state of the EU. However, in 1974 a botched coup to annexe Cyprus by the then Greek military junta led Turkey to invade the island to protect Turks living in the northern area. Turkish control has since increased to approximately 40 per cent of the land area, with the island’s capital, Nicosia, divided (like Belfast) by a peace wall.

Although the IRA might not agree, Cyprus is the only instance of a sovereign state and an EU member being occupied for more than 40 years by another, neighbouring, country. The UN provides a peacekeeping force, with Ireland at one time a significant participant. But the “Dev’s obituary” job of seeking a solution has been ongoing since 1977 and, like the Macedonia problem, constantly refuses to be buried. Successive secretaries-general of the UN have come and gone; the dispute goes on forever.

The collapse of the last round of talks (in Geneva in June) was due to Turkish rejection of the idea that its troops, now numbering approximately 35,000, would ever withdraw, even if all Cypriots (Greeks and Turks) accepted a peace deal. Greece, as a party to the talks, sees this as a total obstacle to any diplomatic dialogue.

The tragedy of Cyprus is the failure of the campaign for union with Greece in the 1950s. Cyprus as part of Greece would have made sense ethnically, politically and economically. Ethnic Turks live peacefully in northeast mainland Greece – enjoying recognition as Greece’s only official minority. Perhaps the absence of oil and gas enables them to live more securely with their neighbours.

Meanwhile, with the IMF stating last month that Greece’s current level of debt is unsustainable, and that therefore further bailouts are nonsensical, those teeming tourists are an ever more significant part of the national income. Most of them are unaware that they are cavorting on a geopolitical fault-line.