What does North Korea want? To be treated like everyone else 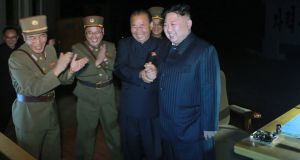 A mystery has long surrounded North Korea’s nuclear and missile programmes. Conventional wisdom holds that the North’s weapons are intended to address the country’s two greatest problems – military inferiority and economic weakness – by deterring the United States and extracting concessions. But in practice, the weapons make both problems worse by increasing the risk of war and ensuring continued sanctions.

So what is driving the North’s actions? Earlier assessments pegged the country as irrational or warped by its own ideology. But virtually every expert now dismisses those explanations, saying that North Korea has managed its history-defying survival too cannily to be anything but coldly rational.

And with each test, most recently Friday’s launching of a missile that according to some estimates could strike most of the United States, the contours of a far more ambitious strategy grow clearer. “People keep asking, ‘What do they want, why do they test these missiles?’” said Joshua Pollack, the editor of the Nonproliferation Review. “But they are telling us very clearly.”

The country says that it plans – and analysts increasingly take this claim seriously – to force the world to accept it as a full member of the international community and, eventually, to reconcile with the United States and South Korea on its terms.

North Korea envisions the United States one day concluding that it has grown too powerful to coerce and the status quo too risky to maintain, leading Washington to accept a grand bargain in which it would drop sanctions and withdraw some or all of its forces from South Korea.

As a show of global acceptance, Kim Jong-un, the North Korean leader, would then be welcomed in foreign capitals and at the United Nations. This political agenda, much like North Korea’s push for an intercontinental ballistic missile, was once dismissed as bluster. But the country’s actions suggest it means what it says.

Experts believe North Korea is likely to fall short of its grander ambitions, which appear premised on miscalculations to which new nuclear powers are often prone. Still, more modest goals, like a grudging global acceptance, may be more feasible.

Even if North Korea’s own leaders consider success unlikely, they may have judged, with some reason, that this is their country’s only shot at long-term survival.

The key to understanding North Korea’s strategy may lie in the recent past of another Asian nuclear state: China. Mao Zedong’s China began, in the 1950s, as a pariah state, isolated and threatened by the United States. It became, in the 1960s, a rogue nuclear power. And then it rose, through the 1970s, into an accepted member of the international community, embraced even by its onetime adversary.

North Korea appears bent on following that progression. A nuclear programme that can threaten the United States, making war unthinkable, would be only step one – and may, with this summer’s missile tests, now be complete.

China ultimately won acceptance by playing the United States against the Soviet Union, not by rattling nuclear sabres. Its size and power also made it impossible for other nations to ignore it, advantages that North Korea lacks. But North Korea’s desperation, as well as its long-time obsession with China, may have led it to see the possibility, however misguided, of achieving success by following Beijing’s script.

“You can see in their language and their approach that they are modelling all this on basically China and the US,” Pollack said. North Korea regularly offers the United States high-level envoy exchanges and even sports diplomacy. The Harlem Globetrotters visited in 2013; Dennis Rodman has made multiple trips. These outreaches, though dismissed as meaningless or just eccentric, appear taken from the history of Beijing’s approach a half-century earlier, with echoes of the so-called Ping-Pong diplomacy.

Though it is difficult to imagine today an American president flying to Pyongyang to shake Kim’s hand and normalise relations, it was not much easier, in the 1960s, to picture President Richard Nixon’s 1972 trip to Beijing. “The key to understanding Kim Jong-un’s long-term strategy has to do with ‘byungjin,’” said John Delury, a professor at Yonsei University in Seoul. Byungjin, or parallel advance, is Kim’s policy of developing the economy alongside the nuclear programme.

A more radical version of North Korea’s strategy, Pollack said, drives toward “what they call the final victory: reunification”

“Ideally, from his perspective, he could replicate the Chinese model by normalizing foreign relations, from the US down, on the basis of a nuclear deterrent,” Delury said. Only then, with its economy, in theory, allowed to catch up to its neighbours’ and its leadership accepted abroad, could North Korea feel secure.

The country often explains its weapons as serving these goals, and it often ties its weapons tests to relatively small demands, like ending US military exercises on the peninsula. Pollack stressed that North Korea sees itself as playing a long game, in which small concessions add up over generations. Kim, who could hold power for decades, has time.

A more radical version of North Korea’s strategy, Pollack said, drives toward “what they call the final victory: reunification”. Experts disagree on whether North Korea remains intent on assimilating the South under its rule, as it attempted with a 1950 invasion and subsequent efforts at destabilising South Korea’s government. But the North continues to claim that as its goal, announcing Friday’s missile test with a pledge to “achieve the final victory”.

“North Korea has consistently proclaimed its determination to unify the homeland and behaved accordingly,” BR Myers, a North Korea scholar at Dongseo University in South Korea, wrote in a research paper last year. Reunification, Myers wrote, would be “the only long-term solution to the regime’s chronic security problems”.

South Korea’s overwhelming prosperity in comparison with its neighbour leaves the North with little reason to exist as a separate state. This legitimacy crisis poses a danger just as existential as US military power. The North’s leaders appear to have concluded, Myers wrote, “that unification would not be possible as long as US troops remained in the South”, leading them to develop weapons that could be used to force an American exit.

While such goals might sound ridiculous to American ears, Pollack believes that North Korea sees this, again, as part of the Chinese model that worked once before. For years, the United States recognised Taiwan, where it based troops, as the rightful Chinese government. But that relationship flipped in 1979, when the United States normalised ties with Beijing and broke its alliance with Taiwan.

North Korea may hope to use a similar playbook, splitting the United States from South Korea. The break would not need to be so drastic to fulfil the North’s goals; official neutrality would do. Beijing’s stated goal of reunification with Taiwan will not happen for decades, if ever, but few doubt its sincerity. North Korea may similarly see reunification prospects as remote and generations away but still essential.

Research on nuclear diplomacy offers two lessons: that North Korea’s strategy is likely to fail and that the country is likely to try anyway. Nuclear threats rarely succeed in extracting concessions from adversaries, according to a book-length study by political scientists Todd Sechser and Matthew Fuhrmann. Nuclear threats are simply not believable; the consequences of using the weapons are seen as too great to be credible. As a result, nuclear states are less likely to successfully coerce an adversary than are non-nuclear states, which can more credibly threaten war.

And because nuclear weapons heighten the risk to both sides, they tend to lock the status quo in place – the opposite of North Korea’s goal. Kim, their research suggests, has greatly enhanced his ability to deter the United States from invading. But if he is hoping to force the United States into a major policy change, he is headed for disappointment.