Obamacare and expletives dominate week of US politics

Donald Trump was busy with self-pardoning, health and army ban on transgender people 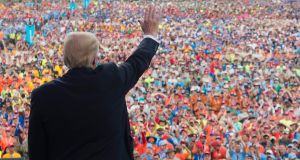 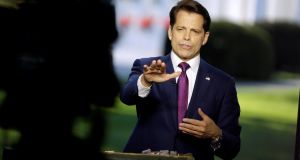 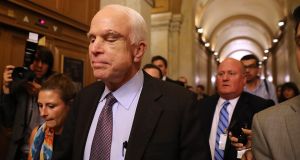 Controversy over whether Donald Trump might seek to pardon himself in relation to the investigation into Russian interference in the US election intensifies, after the US president said on Twitter that “all agree the US president has the complete power to pardon”. One of the president’s personal lawyers, Jay Sekulow, takes to the Sunday morning political TV show circuit to seek to contain the fallout. “We have not and I continue to not have conversations with the president of the United States about pardons,” he says. Legally it’s a grey area. While previous presidents have used their power to pardon – Gerald Ford famously pardoned Richard Nixon after he replaced him in the wake of the Watergate scandal – the US supreme court would likely have to weigh in on whether a sitting president could pardon himself or family members.

Jared Kushner, Trump’s son-in-law and senior adviser, who keeps a low public profile despite his expanding responsibilities in the White House, answers a summons to appear before the Senate intelligence committee. The hearing is off-camera but he issues an 11-page document beforehand stating he “did not collude, nor know of anyone else in the [Trump election] campaign who colluded, with any foreign government”. He also makes a rare statement to the press in the White House grounds rejecting any suggestions of collusion.

Inside the White House, Trump holds a press conference surrounded by “victims of Obamacare”. Urging Republicans to get behind a healthcare plan to replace the Obama-sponsored Affordable Care Act, he says that “any senator who votes against starting debate is telling Americans you are fine with the Democrat nightmare”, setting the scene for a tumultuous week in Congress on healthcare reform.

Trump makes a highly political speech to children at a Boy Scouts of America jamboree.

The future of attorney general Jeff Sessions appears to be in the balance as Trump steps up his criticism of the man he appointed as the nation’s top justice official. At a press conference alongside the Lebanese prime minister, Trump says he is “disappointed” in the attorney general for recusing himself from the Russia investigation and not tackling leaks from the intelligence agencies. Asked about Sessions’s future, he replies: “Time will tell. Time will tell.”

Over on Capitol Hill, Senator John McCain makes an emotional return to the Senate, 10 days after undergoing brain surgery, to cast his vote in a motion to proceed with a debate on healthcare. In a passionate speech to a packed chamber, he urges his colleagues to embrace bipartisanship. “We’re getting nothing done my friends,” he says. McCain’s presence ensures that Senate majority leader Mitch McConnell gets his motion over the line, though healthcare reform is to run into trouble later in the week.

Trump astonishes Washington by announcing on Twitter that transgender individuals will be prohibited from serving in the US military “in any capacity”, undercutting one of the signature policies of the Obama administration. Trump cites “tremendous medical costs and disruption”, though his announcement appears to blindside the Pentagon and defence chiefs.

The president also renews his attacks on Sessions. In two tweets, he questions why the attorney general has not fired the current acting FBI director, Andrew McCabe, who he says “got big dollars ($700,000) for his wife’s political run from Hillary Clinton and her representatives”.

Following a meeting between Sessions and Trump in the White House, press secretary Sarah Huckabee Sanders says the president wants the attorney general “to focus on his duties”. Senior Republicans, including Senate majority leader Mitch McConnell, publicly back Sessions, a former Alabama governor, saying he was correct to step aside from the Russia investigation.

Jeff Sessions breaks his silence on his tensions with the president, telling Fox News that Trump’s comments have been “kind of hurtful”, but reiterating his intention to clamp down on leakers, sending people to jail if needed.

An extraordinary row between newly appointed communications director Anthony Scaramucci and White House chief of staff Rence Priebus erupts into the open after a New Yorker reporter discloses details of a conversation he had with Scaramucci, in which he launched an expletive-ridden tirade against his colleague.

The Republican plan to repeal and replace Obamacare lies in ruins in the early hours after John McCain votes against a so-called “skinny repeal” Bill that Republicans were offering as the first stage in an alternative to Obamacare.

In a dramatic vote in the Senate, three Republicans oppose the Bill – including McCain who casts the final vote, despite last-minute pleading from vice-president Mike Pence. “Three Republicans and 48 Democrats let the American people down. As I said from the beginning, let ObamaCare implode, then deal. Watch!” Trump tweets in response. Earlier in the week, he tweeted that McCain was an “American hero!”

As the ramifications of the healthcare debacle for the Republican Party are being digested in Washington, foreign policy issues return to the fore, with news that North Korea has launched another nuclear missile test.

In a dramatic move, Trump tweets from Air Force One that department of homeland security chief John Kelly was becoming the new chief of staff. He replaces Reince Priebus.