Yes, Steve Bannon should terrify you

His brigade is motley. His agenda? Disruption for its own ugly sake 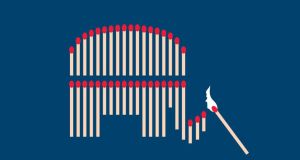 Republican Party reptile: Steve Bannon wants to inflict as much pain and ugliness on the GOP as he can. Illustration: Ben Wiseman/New York Times

Remember all the talk before Steve Bannon was expectorated from the Trump administration that he’d be a worse menace on the outside than on the inside? Turns out it was true.

He popped up last week in a Twitter photograph as unsettling as any image from Puerto Rico, North Korea or Las Vegas. It showed the pot-bellied Pygmalion beside a new protege, Michael Grimm, who is hoping to reclaim, from a fellow Republican, the congressional seat he had to vacate a few years back when he was convicted of felony tax fraud and sent off to the clink.

Bannon apparently wants to help. Why? Excellent question. Grimm’s botched effort to enrich himself by hiding $1 million of his restaurant-business earnings doesn’t exactly scream populism. He has as much to do with draining the swamp as Cheetos do with nutrition. But he’s loud, obnoxious and a thorn in the side of the Republican establishment, and those are the real criteria to be a minion in Bannon’s motley brigade. That photograph of the two of them in Bannon’s Washington town house – the Breitbart Embassy, it’s called – was a declaration of Bannon’s real intent, which is to inflict as much pain and ugliness on the GOP as he can.

Bannon’s not an ideologue. He’s an arsonist. And he doesn’t care who or what is reduced to ashes. What made him so damned angry?

He’s not an ideologue. He’s an arsonist. And he doesn’t care who or what is reduced to ashes. What made Bannon so damned angry? I’ve scoured the long profiles of him and devoured Devil’s Bargain, a biography of sorts by Joshua Green. I know about his father’s stock-market losses and his own estrangement from dewier and more smoothly conformist classmates at Harvard’s business school. Still, I feel there’s something we’re missing, a sequence of belittlements beyond our view. Or maybe not. Maybe this nihilism of his was just his surest ticket to prominence and relevance, which he so obviously craves. No sooner was he out of the White House than he was on 60 Minutes, holding forth.

He visibly swelled with self-satisfaction, as he did weeks later, down in Alabama, linking arms with the insurgent US Senate candidacy of Roy Moore. Was Moore’s appeal to Bannon the fact that as recently as December he was still promoting the lie that Barack Obama was born abroad? Was it his freak-out over homosexuality, which he has likened to bestiality? Or was it the overarching reality that Moore, like Grimm, makes Republican congressional leaders’ skin crawl? For Bannon, Moore is an instrument of torture, and after he won the Republican primary, less than two weeks ago, Bannon and his allies made clear that the scheming and dark fun had only just begun.

In Mississippi they’re trying to persuade Chris McDaniel to wage a Republican-primary battle against Sen Roger Wicker, an incumbent up for re-election next year. I’m not entirely sure what Wicker’s crimes against populism are, but I can tell you a bit about McDaniel, who’s a real charmer. After the Women’s March in late January he wrote a Facebook post that asked: “If they can afford all those piercings, tattoos, body paintings, signs and plane tickets, then why do they want us to pay for their birth control?” Their birth control? There’s some male involvement in unwanted pregnancies and some male investment in preventing them, especially if the male, like McDaniel, is assertively anti-abortion.

On a radio show he once hosted McDaniel mocked the idea of learning any Spanish by volunteering his own translations of “mamacita.” “I think it basically means, ‘Hey, hot mama,’ ” he said. “Or, you know, ‘You’re a fine-looking young thing.’ ” He’s a nasty-sounding old thing, which is another way of saying that he’s catnip to the likes of Bannon.

The GOP, hardly a paragon of sanity in recent years, is looking loonier than ever

Other Republicans in the senate who are up for re-election on Bannon’s hit list and in serious danger of defeat in their primaries include Dean Heller of Nevada and Jeff Flake of Arizona. Their colleague Bob Corker of Tennessee pre-empted that kind of ordeal by deciding to retire at the end of this term, and Tennessee’s Republican governor, Bill Haslam, resisted entreaties to enter the race and tussle with furious Bannonites.

And so the GOP, hardly a paragon of sanity in recent years, is looking loonier than ever. “The formula is to be more aggressive, more outrageous, don’t back down from crazy statements,” one long-time Republican strategist told me. He’s aghast at the fault lines that he sees opening, such as between Republicans with an appropriate wariness toward Trump and those who demand unwavering fealty to him.

The latter camp includes Nick Ayers, who is Mike Pence’s chief of staff. According to an audiotape obtained by Politico, he recently urged major Republican donors to “purge” Trump-bucking lawmakers by denying them any money and instead funding Republican challengers. For Democrats aiming to capture the majorities in the senate and House of Representatives, this is in one sense great news. Jennifer Duffy, who analyses elections for the Cook Political Report, told me that “Republicans’ two toughest Senate races – Nevada and Arizona – are winnable with the incumbents but are going to be very, very rough if the Bannon-backed candidates are the nominees”.

Bannon thinks that any disruption is good and that the best way to get what he wants – a white-centred, nationalist America – is to blow up the establishment

In addition, Duffy said, “You look at Alabama, Tennessee, Mississippi – nominating the wrong candidate could potentially put those races in play for Democrats.” So is Bannon miscalculating horribly and simply out of his gourd? No. He’s not thinking in the conventional terms of Republicans versus Democrats; he’s thinking that “any disruption is a good thing, and that the best way to get what he wants – a white-centred, nationalist America – is to blow up the establishment,” the Republican strategist said. Other Republican operatives agreed. If Bannon can bend the GOP in its current form to that vision, great. If he can’t, then he might as well destroy it to make room for something else.

If Democrats grab the reins of power in the meantime, so be it. He’ll sow and enjoy as much mayhem as he can along the way, and somehow deems that preferable to the status quo. Moore, McDaniel and Grimm aren’t perfect ideological companions, but they’re chaos candidates, and if they manage to get to Congress and the GOP maintains its majorities there, heaven help us all. Just think about what they’ll inject into the formal debate on Capitol Hill; just think about how much further they’ll warp it. It could make the Tea Party’s ascent in 2010 seem tame.

Think about this, too: Moore was twice removed as chief justice of the Alabama supreme court for failing to abide by federal orders. When they came into conflict with his conscience, meaning his extremely conservative interpretation of Christianity, he prioritised the latter. You could call that a triumph of principle. You could also call it a collapse of civic responsibility and respect for the system. No doubt Bannon loved it.