Marilou Danley: ‘He never said anything to me that I understood to be a warning that something horrible was going to happen’ 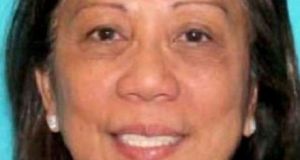 Marilou Danley: her boyfriend carried out a shooting rampage at a Las Vegas concert on Sunday night. Photograph: Reuters

The girlfriend of the Las Vegas gunman who killed 58 people and himself in the deadliest mass shooting in modern US history was questioned by the FBI on Wednesday and said through a lawyer she had no idea beforehand that he was “planning violence against anyone.”

Marilou Danley, who returned to the United States late Tuesday from a family visit in the Philippines and is regarded by investigators as a “person of interest,” said the carnage unleashed by Stephen Paddock while she was abroad caught her completely unaware. “He never said anything to me or took any action that I was aware of that I understood in any way to be a warning that something horrible like this was going to happen.”

Danley, 62, said in a written statement read to reporters by her attorney in Los Angeles, where she was being questioned. “It never occurred to me in any way whatsoever that he was planning violence against anyone,” she added. Her lawyer, Matt Lombard, said he and his client were “fully co-operating” with the Federal Bureau of Investigation and Las Vegas police. More than 500 people were injured, some trampled in the pandemonium, when Paddock, 64, strafed an outdoor concert with gunfire on Sunday night from his 32nd-floor suite of the Mandalay Bay hotel on the Las Vegas Strip. He took his own life before police stormed his room, where they found as many as 23 guns, bringing the total death toll to 59. Twelve of his rifles were fitted with so-called bump stocks, officials said, allowing the guns to be fired almost as though they were automatic weapons. US president Donald Trump visited Las Vegas on Wednesday to pay his respects and support first responders, marking the first time since taking office that he has had to confront a major mass shooting of the type that has killed hundreds of people in recent years in the United States.

Investigators have focused on Danley, an Australian citizen who had shared his retirement community condo in Mesquite, Nevada, northeast of Las Vegas, before leaving the United States for the Philippines on September 15th. FBI agents met her plane from Manila at Los Angeles International Airport and took her away for questioning, two US officials briefed on the case told Reuters.

As of midday Wednesday, there was no indication she was aware of Paddock’s plans, the officials said. Investigators questioned her about Paddock’s weapons purchases, a $100,000 wire transfer to a Philippine bank that they think may have been intended for her, and about whether she saw any changes in his behavior before she left the United States. “Assuming she had no role in his actions, the most important thing is any light she can shed on Paddock’s motive,” said one official, who spoke about the continuing investigation only on condition of anonymity.

Danley said in her statement that Paddock had bought her an airline ticket to visit family in the Philippines and wired her money to purchase property there, and that she thought he might be planning to break up with her.