Theresa May says ‘we can prove Brexit doomsayers wrong’ 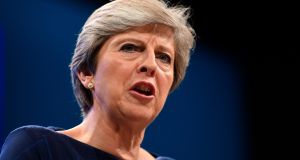 British prime minister Theresa May will say her government is seeking a ‘deep and special partnership’ between the UK and a strong and successful EU. Photograph: AFP 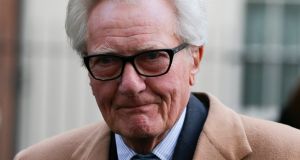 Michael Heseltine: “Brexit is the over-arching issue of our day and it is hugely damaging to the unity of the Conservative Party,” he told the BBC on Sunday. Photograph: Daniel Leal-Olivas/AFP/Getty Images

Theresa May will on Monday urge the European Union to show more flexibility in negotiation over Brexit, telling them that “the ball is in their court”.

The British prime minister will tell the House of Commons as the fifth round of negotiations begins in Brussels that her government is seeking a “deep and special partnership” between a sovereign United Kingdom and a strong and successful EU.

“Achieving that partnership will require leadership and flexibility, not just from us but from our friends, the 27 nations of the EU. And as we look forward to the next stage, the ball is in their court.

Ms May will say the UK can get a deal to prove the anti-Brexit “doomsayers” wrong as she attempts to use the Commons statement to move on from her mishap-hit conference speech and the attempted coup against her leadership.

MPs return to Westminster after a party conference season which saw Jeremy Corbyn consolidate his grip on the Labour party and Ms May deliver a calamitous speech to the Conservative conference.

An attempt to unseat the prime minister, led by former Conservative party chairman Grant Shapps, fizzled out before the weekend as cabinet ministers and prominent backbenchers pledged support for Ms May.

In an interview with the Sunday Times, Ms May dismissed reports that she had been depressed since the election, which saw the Conservatives lose their majority in Parliament.

“One minute journalists are accusing me of being an ice maiden or a robot, then they claim I’m a weeping woman in dire need of a good night’s sleep! The truth is my feelings can be hurt, like everyone else, but I am pretty resilient,” she said.

The prime minister hinted at a cabinet reshuffle, saying it was part of her job “to make sure I always have the best people in my cabinet”. But former deputy prime minister Michael Heseltine warned it would be “very dangerous” to attempt a reshuffle because it would reopen the question of who should succeed her.

“Brexit is the over-arching issue of our day and it is hugely damaging to the unity of the Conservative Party,” he told the BBC.

“They can’t make up their minds, either about the issues or the personality they would like to put in her [Theresa May’s] place and that’s the argument for the reshuffle because it could broaden the choice.”

Amid calls for the prime minister to sack him, foreign secretary Boris Johnson on Sunday made an elaborate display of loyalty, writing in the Sunday Telegraph that any move against Ms May could precipitate an election nobody wanted.

“Quo quo scelesti ruitis? as Horace put it at the beginning of a fresh bout of Rome’s ghastly civil wars, and which roughly translates as: what do you think you are doing you nutters?” he wrote in the Sunday Telegraph. to be

“From what I can see the Tory herd has refused to be so goaded. We have sniffed the air and turned sensibly away from the cliff.”