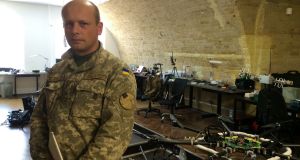 Yaroslav Honchar, who as a volunteer battled Russian-led militia in eastern Ukraine and helped make drones for government forces, is now part of Nato-mentored efforts to modernise the way his country’s military fights. Photograph: Daniel McLaughlin 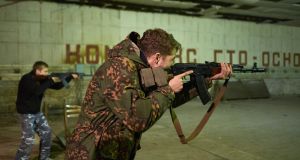 Teenagers and children get shooting instructions from members of a paramilitary group called Self Defense Mariupol, in Mariupol, Ukraine. Photograph: Pierre Crom/Getty Images

On May 9th, 2014, in the chaotic early days of the war in eastern Ukraine, pro-Russian gunmen seized the first two floors of police headquarters in the city of Mariupol. On the third floor, trapped and barricaded in, were officials from Ukraine’s beleaguered security forces.

“There were people from the defence ministry, the interior ministry and volunteer battalions there,” says Yaroslav Honchar, who was then a leader of the nascent Azov volunteer unit that was based near the city.

“Each of them started to call his own people for help. There was no conception of how to work together. So in comes a unit of the national guard, our volunteer battalion and another one, and the military,” he recalls.

“My guys liberated the building and were then arrested by the national guard, who should have been fighting alongside us. We managed to clear out the terrorists but it could have been done much better and with fewer losses – miscommunication prevented us from fulfilling our mission successfully.”

As colleagues tinker with a reconnaissance drone behind him, Honchar reflects on how that bloody and bewildering day showed that his country was effectively fighting blind.

With Ukraine reeling from a revolution that ousted Kremlin-backed leader Viktor Yanukovich, Russia had seized Crimea and launched an uprising with local separatists in the eastern Donetsk and Luhansk regions.

It was immediately clear that Ukraine’s armed forces and security services, crippled by decades of corruption, neglect and Russian infiltration, would struggle to crush insurgents covertly controlled and reinforced by Moscow’s military.

With the state in disarray, volunteers stepped in.

They formed battalions of fighters and vast supply chains to keep them fed and equipped, using donations to buy everything from flak jackets and night-vision goggles to ambulances and medicines.

As civilians plugged gaping holes in Ukraine’s defences, Honchar joined engineers and model-plane enthusiasts in forming a volunteer group called Aerorozvidka (“Aerial Reconnaissance”) that was making drones for the military.

These became vital intelligence-gatherers for Ukraine’s forces, and Aerorozvidka went on to build – without state funding – a network of sensors and cameras along the frontline to monitor enemy movements.

Such was the group’s ingenuity and the success of its drones, despite attacks by Russia’s powerful electronic warfare systems, that it attracted the attention of a Nato alliance that is rapidly expanding its co-operation with Ukraine.

Aerorozvidka “showed such remarkable results that now their activity is directly supported by Nato”, says Bela Teczely, a Nato liaison adviser based in Kiev.

“We call them the ‘Nato tiger team’. This way it is guaranteed that all their developments will be compatible with the alliance.”

The group is now integrated into the Ukrainian general staff, liaises with all branches of the security services and receives advice from Nato specialists.

Perhaps its most striking creation is “Delta”, a system that combines digital maps with information collated from satellites, drones, sensors and other sources to allow real-time, on-screen monitoring of military movement in the conflict zone.

In combination with western-style battlefield command and control techniques that Ukrainian officers are learning from Nato trainers, Delta could free the country’s forces from bureaucratic Soviet-style methods and transform their speed of action.

“Quite a lot of people in the military now understand what we’re doing and use what we give them to the maximum. They’re usually the ones who went through the toughest days [of fighting],” says Honchar (38).

“But there aren’t so many of them in the top leadership. With a guy over 50 who’s never used email, it’s hard to teach him how to use the latest operating system when he’s spent his life drawing on maps with a pencil.”

Delta could not only revolutionise how quickly Ukraine’s military registers and reacts to changes on the battlefield but also, alongside communication equipment provided by Nato states, help break its reliance on systems inherited from Soviet forces that are easy for Russia to hack, scramble and intercept.

“It’s much more efficient to fight when your weapons systems and standard operational procedures differ from your enemy’s ones,” says Teczely, a Hungarian communications and computer expert.

In exchange for equipment and training, Nato is developing military interoperability with a nation of 46 million people, with a strategic Black Sea coastline and invaluable experience of how modern Russia and its proxies fight.

“Using the equipment in the eastern battlefield gives priceless feedback for the providers,” explains Teczely.

“For example, now we know how high-frequency tactical radios – used by Nato as well – behave under the electronic warfare conditions of Russia. And here is a real set of lessons learned about modern hybrid warfare and its elements: command and control warfare, cyber war, economic pressure, etc.”

Three years of undeclared war with Russia have killed more than 10,000 people and, largely unseen, subjected Ukraine to cyber aggression that may be unprecedented in scale and duration, involving thousands of incidents each month.

Ukraine blames Moscow for the onslaught, including major cyber attacks that shut down parts of the national power grid, and a virus in June that struck Ukrainian ministries, banks, airports and even monitoring systems at the Chernobyl nuclear power plant before spreading around the world.

One of 10 diverse Nato-Ukraine “trust funds” – which currently have about €40 million in funding – focuses on boosting the country’s cyber defences; under Romanian leadership it is providing equipment, training and expertise to build computer emergency response teams for the government and security services.

The US pledged $5 million (€4.26 million) last week to Ukraine’s cyber security effort and discussed “ways to protect critical infrastructure and military systems” with Kiev – highlighting the growing value to western powers of this country’s experience of Russian hybrid warfare.

For Ukrainians who grew up believing Russia was an eternal friend and Nato a potential threat, the change is startling.

“A few years ago I may have seen Bela as an enemy,” Honchar says of Teczely. “But not now.”