The one-time presidential candidate had been battling brain cancer

John McCain, a former prisoner of war in Vietnam who ran unsuccessfully for U.S. president as a self-styled maverick Republican in 2008 and became a prominent critic of President Donald Trump, died on Saturday (26th), his office said. He was 81. 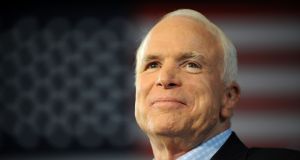 US senator John McCain had served the United States for 60 years. Photograph: by Robyn Beck/AFP

US presidents past and present have joined world leaders in mourning one-time presidential candidate and war hero John McCain, praising him for a lifetime of service and accomplishments.

President Donald Trump, who once criticised his fellow Republican for being taken prisoner during the Vietnam War, said his “deepest sympathies and respect” went out to Mr McCain’s family.

Mr McCain, 81, died on Saturday at his ranch in Arizona after a year-long battle with brain cancer.

Mr McCain’s wife Cindy said she was heartbroken by the death of an “incredible man”. In a post on Twitter, she said: “My heart is broken. I am so lucky to have lived the adventure of loving this incredible man for 38 years. He passed the way he lived, on his own terms, surrounded by the people he loved, in the the place he loved best.”

A black hearse, accompanied by a police motorcade, could be seen driving away from the ranch near Sedona where Mr McCain spent his final weeks.

For 50 miles along Interstate 17 southbound, on every bridge and at every exit slip road, people watched the procession.

Hundreds, including many waving American flags, parked their cars and got out to watch.

Barack Obama, who triumphed over Mr McCain in 2008, said that despite their differences, Mr McCain and he shared a “fidelity to something higher – the ideals for which generations of Americans and immigrants alike have fought, marched, and sacrificed”.

Mr Obama said they “saw our political battles, even, as a privilege, something noble, an opportunity to serve as stewards of those high ideals at home, and to advance them around the world”.

On behalf of the people of Ireland, I extend my deepest sympathies on the death of Senator John McCain, a wise and remarkable statesman, US ally of Ireland and a proud Scots Irishman who was a champion for immigration reform in the US Senate.

My heart is broken. I am so lucky to have lived the adventure of loving this incredible man for 38 years. He passed the way he lived, on his own terms, surrounded by the people he loved, in the the place he loved best.

My deepest sympathies and respect go out to the family of Senator John McCain. Our hearts and prayers are with you!

Our statement on the passing of Senator John McCain: pic.twitter.com/3GBjNYxoj5

Former president George W Bush, who defeated Mr McCain for the 2000 Republican presidential nomination, called Mr McCain a “man of deep conviction and a patriot of the highest order” and a “friend whom I’ll deeply miss”.

Mr Bush was among those expected to speak at Mr McCain’s funeral.

Mr McCain is expected to be remembered at ceremonies in Arizona and Washington before being buried, probably this coming week, at the US Naval Academy Cemetery on a peninsula overlooking the Severn River in Annapolis, Maryland.

Tributes poured in from around the globe.

UK Prime Minister Theresa May hailed Mr McCain as “a great statesman, who embodied the idea of service over self”, while her predecessor David Cameron said the world had “lost a great defender of liberty”.

The Taoiseach Leo Varadkar said Mr McCain was “a wise and remarkable statesman, US ally of Ireland and a proud Scots Irishman who was a champion for immigration reform in the US Senate”.

President Michael D Higgins said members of the Irish communities in the US will recall his efforts with the late Senator Edward (Ted) Kennedy and others to achieve a resolution of the position of out-of-status immigrants, including the Irish, in the United States.

“His commitment to bi-partisanship on a number of issues should also be acknowledged and particularly his efforts, for example, to attend crucial votes in the United States Senate at some of the most difficult periods of his illness. On behalf of the people of Ireland, I extend my sympathy to his wife and family.”

French President Emmanuel Macron tweeted in English that Mr McCain “was a true American hero. He devoted his entire life to his country”.

German Chancellor Angela Merkel said Mr McCain was “one of the great political personalities of our time”, adding that he was “a tireless fighter for a strong transatlantic alliance; his significance went well beyond his own country”.

Mr McCain was the son and grandson of admirals and followed them to the US Naval Academy.

A pilot, he was shot down over Vietnam and held as a prisoner of war for more than five years.

He went on to win a seat in the House of Representatives and in 1986, the Senate, where he served for the rest of his life.

Former vice president Joe Biden, who developed a friendship with Mr McCain while they served together in the Senate, said the Arizona politician will “cast a long shadow”.

“The spirit that drove him was never extinguished: we are here to commit ourselves to something bigger than ourselves,” Mr Biden said.

The Senate’s top Democrat, New York’s Chuck Schumer, said he wants to rename the Senate building that housed Mr McCain’s suite of offices after him.

“As you go through life, you meet few truly great people. John McCain was one of them,” Mr Schumer said.

“Maybe most of all, he was a truth teller — never afraid to speak truth to power in an era where that has become all too rare.”

France backs mediation and dialogue with Russia to end crisis in Belarus 18:45
Armenia, Azerbaijan accuse one another of firing on each other’s territory 18:22
Netherlands bans inter-city travel with second lockdown in prospect 17:48
German minister in ‘plea to the Brits’ for Brexit pragmatism 17:43
Ireland will not be Brexit ‘collateral damage’, says Coveney in Washington 17:28