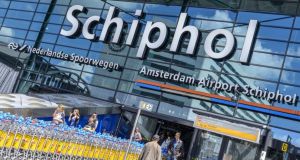 At Schiphol airport, Viktor Zelenkin and his 14-year-old son Maksim were handcuffed so that they wouldn’t be able to physically resist being put on the aircraft.

On Saturday, July 7th – the dog days of summer, when nobody notices such things – Viktor Zelenkin and his wife, Olga Andropov, who had lived in the Netherlands for 17 years, were picked up by the Dutch authorities, along with their three children, and deported back to their native Ukraine.

The family, who had been living in rural Culemborg in the centre of Holland, had done nothing in particular to merit deportation: they’d simply been crossed off the “stay” list when minister for justice Mark Harbers was dealing out discretionary residence permits to long-term immigrants recently.

In that sense, this story was nothing new: just another sad confirmation that even in the relatively affluent northern Europe of 2018, “the weak” – as Thucydides observed as far back as the fifth century BC – “suffer what they must”.

To that extent nothing had changed; it was barely worth a shrug of the shoulders.

The family – including 14-year-old Maksim, 10-year-old Denis and five-year-old Arina, all of them born, raised and schooled in the Netherlands – were picked up at 9.30 on the morning of their deportation.

At Schiphol airport, the father and elder son – who had done nothing wrong and had lived in the Netherlands blamelessly for years – were handcuffed so that they wouldn’t be able to physically resist being put on the aircraft. It was just protocol, they were told.

“Victor was ashamed to be handcuffed in front of his children, but it was far worse for both of us to see our 14-year-old son handcuffed, literally for nothing,” Olga Andropov told Dutch radio from the Ukrainian capital, Kiev, later that day.

That might have been the end of the story, but for the fact that – quite uncharacteristically – the reserved people of Culemborg took to the streets and staged a noisy protest at the family’s deportation and to highlight the bizarre situation in which they now found themselves in Ukraine.

With nowhere to go, they were given shelter by a religious institution in Kiev. They approached a local school and discussed the fact that their three children spoke neither Ukrainian nor Russian – which, they were told, could be a problem for the two boys.

In particular, they were warned, it would pose real psychological and emotional challenges for Maksim, who has a developmental disorder – a fact confirmed by the principal of his Dutch school, Joost van Rijn.

It was here that a story which was already sad and bizarre became downright Kafkaesque.

Viktor and Olga were advised that they could apply for three-month tourist visas for Maksim and Denis – who, after all, were born in the Netherlands –– so that they could return to their old school in Culemborg next month to resume their studies in the new autumn term.

The advice was good, and the tourist visas to the country where they were born were duly granted earlier this month.

They will stay with the families of former school friends during the week, but have no idea what will happen when the initial three-month period has passed.

“In three months’ time they’ll come back to Ukraine and we’ll apply for two new tourist visas,” says their mother. “I have no other ideas: that’s the best I can do for them at the moment.”

So, having allowed Victor and Olga to stay in the Netherlands for 17 years, and to raise a family here, the authorities have now deported them to a country where their children cannot be schooled because they don’t speak the language – with the result that they will have to return to the Netherlands on tourist visas to continue their education.

There is, no doubt, an immigration official somewhere in the Netherlands who would attempt to justify that sequence of events, but for the people of Culemborg justification is impossible.

“This has made a big impression on the children in particular,” says the family’s lawyer, Frank King. “They were living quietly in a Dutch community. They were going to school, speaking the language, integrating well. There was no need for any of this.

“Now they’ve been traumatised by being taken from their home and sent to a completely alien location where they know nobody. They’ve been treated like criminals. What they’ve learned is: you cannot trust the Dutch system you thought you were part of.”

King says he’s considering taking a case in the Dutch courts on the grounds that the immigration authorities’ actions were contrary to the United Nations Convention on the Rights of the Child.