Macron is left reeling after summer of scandals

French president ploughs on with reform agenda amid increasing disillusionment 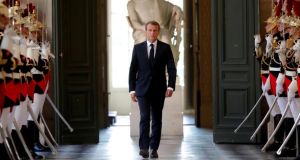 Predictions that French president Emmanuel Macron would back down when he reformed the labour code and the SNCF railway system proved false. Photograph: Charles Platiau/Reuters

Before he left his summer residence at the Fort de Brégançon for Paris, after a three-week break, French president Emmanuel Macron mingled with a crowd of well-wishers. “Don’t think for a second that I will slow down or change course,” he promised them.

The summer has not been easy for Macron. A scandal over the misconduct of his former head of security, Alexandre Benalla, who beat up protesters at a May Day rally, was seized upon by the opposition to discredit Macron. The construction of a swimming pool at Bregançon, and Brigitte Macron’s selection of new china, also came under fire.

The “Benalla affair” is one of four scandals ticking away in Macron’s immediate circle. This week, the Canard enchâiné satirical weekly revealed that prior to taking office, culture minister Françoise Nyssen enlarged the offices of her publishing company by building 150sq m of mezzanines in a listed 18th century building, without seeking planning permission or paying additional property tax. Protecting heritage sites is part of Nyssen’s brief as culture minister.

In addition to the Benalla and Nyssen scandals, the secretary general of the Élysée, Alexis Kohler, is under fire for alleged favouritism and conflict of interest. As a high-ranking official, Kohler had approved public contracts for a shipbuilding company owned by his mother’s cousins.

The labour minister Muriel Pénicaud is also the subject of an inquiry, for having awarded a contract to organise a trip to Las Vegas by Macron when he was economy minister without a bidding process.

Another challenge facing Macron is the fact that French growth was the slowest in the euro zone during the first half of 2018. The government had counted on 2 per cent growth this year, but economists say it will be closer to 1.7 per cent. Inflation is rising and 58 per cent of respondents in an Elabe poll published on Wednesday said government policies were causing their personal situations to worsen.

Macron’s response to these difficulties is to plough ahead. He has created what the economic daily Les Échos calls “a gigantic traffic jam” of reforms to be negotiated and enacted from September. His administration is engaged in a high-wire balancing act between conservative and left-leaning factions of his centrist constituency. Conservatives criticise what they see as government profligacy, while leftists still see Macron as the “president of the rich”.

Reforms slated for this autumn and winter are likely to strengthen Macron’s liberal, not social, credentials. He intends to boil France’s 42 retirement regimes down to a single set of rules based on points earned. It is in effect a nationwide shift from defined benefits to defined contributions. “Every euro contributed will give rise to the same rights,” Macron says.

Pascal Pavageau, the secretary general of Force Ouvrière (Workers’ Force) trade union lashed out at the pension reform on France Inter radio this week, saying it was “the end of solidarity” and that “no one will ever be able to retire” because “whether you are 65, 70 or 75, you’ll never have enough points to be able to stop working”.

France combines a 9.1 per cent jobless rate with labour shortages in certain sectors. Macron wants to revisit the amount of unemployment compensation, the length of eligibility and incentives to find work.

Predictions that Macron would back down when he reformed the labour code and the SNCF railway system proved false. Pensions and unemployment insurance are equally explosive issues, but Macron has the advantage of building on previous victories.

After repeated postponements, Macron’s “poverty plan” has been scheduled for presentation in mid-September. Statements by the ministers of the economy and the budget, and a video posted by the Élysée in which Macron said “We pour a crazy amount of dough into social welfare, and people are still poor,” give a taste of things to come. No matter how much money the government redistributes, it is “always insufficient”, Macron added subsequently, saying he preferred to “attack the roots of inequality”.

A reform of the hospital system, the move to withhold income tax at source and an institutional reform to dramatically reduce the number of parliamentarians are also on Macron’s autumn agenda.

The institutional reform had to be postponed because of the Benalla affair. Macron’s supporters accuse the opposition of turning a silly season news story into an affair of state. “Because they don’t have any ideas, they compared the excesses of a little yobbo with the Élysée wire-tapping scandal [under François Mitterrand] or even Watergate,” said Le Parisien newspaper.

Investigators are still waiting to question Benalla’s fiancée, Myriam, who reportedly removed a safe from the couple’s apartment the day after the scandal broke. The couple were forced to postpone their wedding when Benalla was detained by police.

None of these scandals threaten to drive Macron out of office, but they have dented his promises of “exemplary probity” and increased disillusionment with the political class.