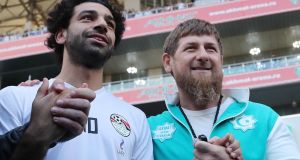 Ramzan Kadyrov, the president of Chechnya, has ordered an official crackdown on human rights groups in the North Caucasus Russian republic, accusing them of stirring opposition to his strongman rule with the backing of western governments.

The move follows a series of apparently co-ordinated attacks by teenagers on police in mainly Muslim Chechnya this week that left five boys dead and several law enforcers injured.

Islamic State claimed its militants were responsible for the violence without providing evidence.

Mr Kadyrov announced plans on Thursday to bar human rights groups from Chechnya for disrupting the peace in the republic with the support of hostile western governments. “They are invited to America and and handed prizes for their activities here and then return to Chechnya and say they are defending human rights,” he told a televised meeting with the Chechen interior ministry. “For me they are terrorists and extremists.”

Mr Kadyrov said he would wait to trigger the ban until a court ruling on the case of Oyub Titiev, the head of the Memorial human rights organisation in Chechnya, who is undergoing trial on drugs charges that are widely believed to be fabricated. If found guilty the 60-year-old activist could face 10 years in jail.

Mr Kadyrov castigated rights groups for failing to protect his interests when the European Union and the US “unlawfully” included his name on a list of high-ranking Russian individuals for sanctions. Imposed in 2014 and 2017, the penalties have barred Mr Kadyrov from travelling to the West and from bringing home valuable racehorses that had been competing in foreign tournaments.

Mr Kadyrov was on a private visit to Saudi Arabia on Tuesday when five teenagers launched a series of apparently co-ordinated attacks on police stations and checkpoints in Chechnya.

As often happens after violent incidents, Chechen law enforcers have been taking reprisals, rounding up the friends and relatives of the teenagers, according to independent Russian news websites.

The Kremlin looks to Mr Kadyrov to impose order in Chechnya, where rebels have fought two violent wars with Russian forces since the collapse of the Soviet Union in 1991.

Rights groups have accused Chechen security forces of brutal methods, including arbitrary arrests, torture and extrajudiciary killings in the name of a crackdown on a simmering Islamist insurgency. Rights defenders have paid a high price for criticising the authorities.

Nataliya Estemirova, Mr Titiev’s predecessor at the Memorial office in Chechnya, was kidnapped and murdered in 2009. Anna Politkovskaya, a Russian investigative journalist, was shot dead outside her Moscow apartment in 2006 after writing numerous articles exposing human rights abuse in Chechnya.