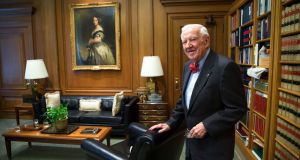 Justice John Paul Stevens in his chambers at the US supreme court in Washington in April 2014. Photograph: Doug Mills/The New York Times

John Paul Stevens, whose 35 years on the US supreme court transformed him, improbably, from a Republican antitrust lawyer to the outspoken leader of the court’s liberal wing, died Tuesday at a hospital in Fort Lauderdale, Florida. He was 99.

The cause was complications from a stroke he suffered the day before, the supreme court announced in a statement. When he retired in 2010 at age 90, Mr Stevens was the second-oldest and the second-longest-serving justice ever to sit on the court. Oliver Wendell Holmes Jr was about eight months older when he retired in 1932, and William O Douglas had served 36 years (1939-75).

Mr Stevens had spent much of his service on the court in the shadow of more readily definable colleagues when he emerged as a central figure during a crucial period of the court’s history: The last phase of chief justice William Rehnquist’s tenure and the early years under chief justice John Roberts.

It was a time when the court took an active role in balancing individual liberty and national security and in policing the constitutional separation of powers, asserting a muscular brand of judicial authority that was welcomed by neither the White House nor Congress.

Societal debates over the rights of gay men and lesbians, the role of race, private property rights, environmental regulation and the separation of church and state also made their way onto the supreme court’s docket, and Mr Stevens, a soft-spoken Republican and former antitrust lawyer from Chicago, was as surprised as anyone to find himself not only taking the liberal side but also becoming its ardent champion.

In 2002, it was Mr Stevens who wrote the opinion in Atkins v Virginia, declaring that the US constitution does not permit executing the mentally disabled. Such defendants “face a special risk of wrongful execution,” he said, because of their limited ability to understand their actions and participate in their own defence.

Justice Antonin Scalia’s dissenting opinion in that case provided an example of how deeply divided the court was during those years on both methodology and outcomes. He complained that the 6-3 majority had simply enshrined its own views as constitutional law.

Two years before that, Mr Stevens had his own turn at a bitter dissent, in Bush v Gore, the case that effectively decided the 2000 presidential election by stopping the Florida recount. He said that although the actual winner of the presidential election might remain unknown, “the identity of the loser is perfectly clear”: It was “the nation’s confidence in the judge as an impartial guardian of the rule of law.”

Mr Stevens, appointed to the court by president Gerald Ford in 1975, became the senior associate justice in 1994. The role showed him to be a strategic thinker and canny tactician whose genial personality and impressive analytic power could forge a path that might have appeared blocked by the sheer arithmetic of a majority that was well to his right.

But his emergence as the court’s most liberal justice was not simply a result of standing still amid a shifting landscape. His own views changed over time, moving to the left, particularly on the death penalty and on questions of racially conscious government policies.

His frequent dissenting opinions, he said, arose from a conviction that both the public and the law were best served when differing views were expressed and explained, rather than suppressed for the sake of surface collegiality.

John Paul Stevens was born in Chicago on April 20, 1920. He was the fourth son and youngest child of Ernest James Stevens and the former Elizabeth Street. In 1942 he married Elizabeth Jane Sheeren, with whom he had a son and three daughters. The couple divorced in 1979, and Mr Stevens married Maryan Mulholland Simon the next year. She died in 2015. His son, John Joseph, died of cancer in 1996, and his daughter Kathryn preceded him in death.

He is survived by two daughters, Elizabeth Jane Sesemann and Susan Roberta Mullen, nine grandchildren and 13 great-grandchildren. Among the positions for which Mr Stevens was best known on the court was his insistence on strict separation of church and state. “Whenever we remove a brick from the wall that was designed to separate religion and government, we increase the risk of religious strife and weaken the foundation of our democracy,” he wrote in dissent from a 2002 decision that upheld an Ohio program providing taxpayer-financed vouchers for religious school tuition.

In retirement he wrote frequently, and in 2011 he published a memoir, “Five Chiefs.” In 2014 he published “Six Amendments: How and Why We Should Change the Constitution.” This year, he published “The Making of a Justice: Reflections on My First 94 Years.” –New York Times