Why do immigrants vote for people like Donald Trump?

Propelled by a feeling of debt to host countries, migrants wrestle with conflicting identities 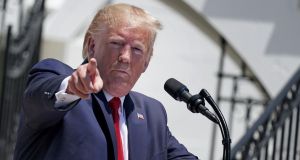 US president Donald Trump: The 17 per cent of Latin Americans who voted for him were concerned by a potential influx of illegal Latin American immigrants threatening their jobs and their status. Photograph: Chip Somodevilla/Getty

When Henry Kissinger first became US secretary of state in 1973, the Israeli prime minister, Golda Meir, who had a year left of her premiership, wrote to him in search of support. He replied that he was first an American, second secretary of state and third a Jew. Her response was both witty and revealing: “In Israel we write from right to left.”

For Meir, a Jew born in Kiev who moved to British mandated Palestine in 1921, her identity as a Jew who was now settled in her homeland, among her people, was certain and secure. For Kissinger, a German-Jewish refugee who had fled to America in 1938, his identity was also clear. But while Golda Meir had no conflict between her Jewish identity and her nationality, Kissinger had to create a hierarchy for those elements.

Immigrants often feel a deep sense of debt to the country that has allowed them to settle. This sentiment is greatly amplified when the immigrants are refugees. Many choose to seek naturalisation as quickly as possible to secure their future. While assimilation takes much longer, most adopt the rhythm of their new country while maintaining their culture of origin.

The emotional need to be accepted by their citizen hosts, as they perceive them, leads to some unusual political choices and large bouts of amnesia. The 17 per cent or so of Latin Americans who voted for Trump were primarily concerned by a potential influx of illegal Latin American immigrants threatening their jobs and their status. That Trump called Mexicans “rapists and bad hombres” mattered less to them than the fear that their identity as Americans be undermined.

Some 18 months ago, I challenged an old friend of my mother’s who voted for Brexit. I was incensed that this highly intelligent former magistrate from London, a practising Jew whose mother had emigrated from Portugal, could possibly choose the same side of the debate as Viktor Orban, Marine LePen, Matteo Salvini and their ilk. But while this company made her feel uncomfortable, her identity is British and Jewish equally and her expression of Britishness sits perfectly at ease with leaving the EU.

She seemed inured to the reality that anti-Semitism and all racist attacks rose sharply in the days and weeks following the referendum and is utterly convinced that the refugees from Syria are widely infiltrated by Isis; a position that she is unable to prove or see as the least bit racist.

Today’s breed of nationalist politician recruit a collection of brown-skinned and Jewish aides to shield them from accusations of racism. Trump uses Jared Kushner, Steve Mnuchin and Ben Carson. Raheem Kassam was a senior adviser to Ukip.

For these political servants, Leave.EU’s Breaking Point poster depicting a long human train of refugees did not mean them. They or their families may have been refugees or immigrants once but their past has since been whitewashed, literally.

When Boris Johnson scoffs at Muslim women wearing a veil, describing them as looking like letter boxes and bank robbers, he knows exactly how this plays with an audience who are ignorant of Islam and whose mindset is lost in a fantasy of a white man’s British imperialism.

But he also knows that enough British Muslims understand the fear among a swathe of the British electorate that Islam is dangerous to their way of life, to vote for him in order to prove their British credentials.

As a secular, British-born, Jewish resident of Ireland and the son of a Polish Holocaust survivor I have learned much about the conflicts of identity. Writing about his own identity, Einstein said, “I am by heritage a Jew, by citizenship a Swiss, and by make-up a human being, and only a human being, without any special attachment to any state or national entity whatsoever.” His description of identity feels very familiar to me.

For this is the real value of the system of liberal democracy. The concept provides equality for the individual before the law, in the work place and at the ballot box based on a principle of inalienable human rights. Upholding and applying these laws is the only way to successfully resist the rise of populism.

There isn’t a single nativist government today that hasn’t systematically broken the law, whether Trump in America, Orban in Hungary or Babis in the Czech Republic.

They have all gamed the system financially and manipulated social media in a way that breaks election rules. If the law was applied faithfully, they’d all be in prison.

I was born in London in 1968, a city that voted overwhelmingly to remain in the EU. I have never been threatened by a Muslim, in any garb, nor by the concept of immigrants; I come from an immigrant family and am one, myself in Ireland. It is obvious why the big cities have the most open societies. If you come into contact with people you don’t know, you’re more likely to make up your own mind about them rather than have it bought by an election advertisement.