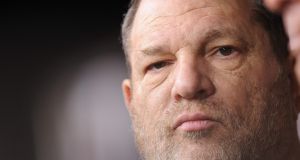 Some 80 women, including prominent actresses, have accused Harvey Weinstein of misconduct ranging from rape to harassment. File photograph: Robyn Beck/AFP/Getty

The Weinstein Co has filed for bankruptcy and announced it was releasing any victims of or witnesses to its co-founder’s alleged misconduct from non-disclosure agreements.

It is the latest twist in the company’s efforts to survive the sexual misconduct scandal that brought down its co-founder, shook Hollywood and triggered a movement that spread out to convulse other industries.

The company’s announcement that it was also releasing victims or witnesses from non-disclosure agreements had long been sought by New York Attorney General Eric Schneiderman, who filed a lawsuit against the company last month on behalf of its employees.

“Since October, it has been reported that Harvey Weinstein used non-disclosure agreements as a secret weapon to silence his accusers. Effective immediately, those ‘agreements’ end,” the company said in a statement. “No one should be afraid to speak out or coerced to stay quiet.”

In a statement, Mr Schneiderman praised the decision as “a watershed moment for efforts to address the corrosive effects of sexual misconduct in the workplace”.

The movie and TV studio becomes the first high-profile company to be forced into bankruptcy in the nationwide outcry over workplace sexual misconduct.

Dozens of prominent men in entertainment, media, finance, politics and other realms have seen their careers derailed, but no other company has seen its very survival as tightly intertwined with the fate of one man as the Weinstein Co.

Some 80 women, including prominent actresses, have accused Weinstein of misconduct ranging from rape to harassment.

Weinstein, who was fired as his company’s chief executive in October, has denied any allegations of non-consensual sex.

The Weinstein Co said it has entered into a “stalking horse” agreement with an affiliate of Dallas-based Lantern Capital Partners, meaning the equity firm has agreed to buy the company, subject to approval by the US Bankruptcy Court in Delaware.

Lantern was among a group of investors that had been in talks for months to buy the company outside of bankruptcy.

That deal was complicated when Mr Schneiderman filed his lawsuit, citing concerns that the sale would benefit executives accused of enabling Weinstein’s alleged misconduct and provide insufficient guarantees of compensation for his accusers.

Talks to revive the sale finally fell apart two weeks ago when the group of buyers said they had discovered undisclosed liabilities.

The Weinstein Co said it chose Lantern as a potential buyer because the firm was committed to keeping on the studio’s employees as a going concern.

“While we had hoped to reach a sale out of court, the Board is pleased to have a plan for maximising the value of its assets, preserving as many jobs as possible and pursuing justice for any victims,” said Bob Weinstein, who co-founded the company with his brother Harvey in 2005 and remains chairman of the board of directors.

Lantern co-founders Andy Mitchell and Milos Brajovic said they were committed to “following through on our promise to reposition the business as a pre-eminent content provider, while cultivating a positive presence in the industry.”

Under bankruptcy protection, civil lawsuits filed by Weinstein’s accusers will be halted and no new legal claims can be brought against the company. Secured creditors will get priority for payment over the women suing the company. –PA