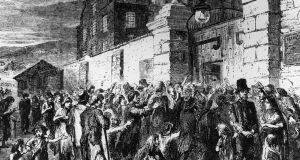 Illustration of starving peasants clamouring at the gates of a workhouse during the Irish potato famine, 1846. Photograph: Hulton Archive/Getty Images

Thousands of tourists - many of them American tracing their ancestors - will travel part of the scenic route the Wild Atlantic Way this weekend. But the tourist trail also signposts the devastation caused by the Great Famine.

A new interactive map produced by Queen’s University College, Belfast shows how in the space of 10 years, between 1841 and 1851, many parishes along the Western seaboard lost more than half their population.

Using Census data from 1841 and 1851 along with the Poor Law Commissioner’s Reports, the map was developed by Dr Alan Fernihough, a lecturer in economics in Queens University Belfast.

“The idea of making it accessible is to make it history that people can literally touch. We have all these stories of depopulation. It is only when you scroll through different parishes that you see the reality of that.

“You can see the location services on your mobile phone to find out the impact of the famine wherever you are located in the Republic of Ireland and Northern Ireland, something that would be of interest to tourists,” he told The Irish Times.

The devastation was near-Bibical in its impact. Lackan on Mayo’s north-west coast saw its numbers falls from 2,943 to 1,166, a loss of 60 per cent. Parishes around old Skibbereen, which inspired the famine song of the same name, lost more than 40 per cent . Skibbereen itself lost a third of its people.

The famine was the greatest disaster in Irish history and one of the most enduring demographic catastrophes to impact any country. The population decreased from 8.2 million in 1841 to 6.5 million in 1851 and continued to fall.

The Irish population has yet to recover to the level that it was at before the famine.
Dr Fernihough said the impact of the famine at national level had been well documented, but the use of modern technology made it possible to chronicle it at the local level.

“A lot of the famine is inaccessible at local level especially for those who are interested in getting into history or genealogy,” he said.

Dr Fernihough said the influx of refugees, many of them from Donegal, changed the character of Belfast from an overwhelmingly Presbyterian city to a mixed city.

He said he was also working on new data on soup kitchens and migration which confirmed a number of patterns.

It would reveal, he said, that depopulation in the midlands had been caused mostly by migration, but in the west of Ireland mostly through death. In the poorest parts of Ireland many people could not even afford to emigrate.

The site can be accessed at https://irishfamineproject.com