The Funeral Murders: ‘They were like hyenas ripping their kill apart’

TV Review: Chilling account of the murder of two British soldiers at an IRA funeral in 1988 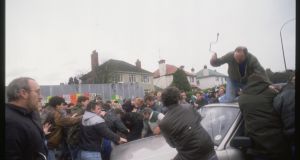 The conflict in Northern Ireland has been examined in so many ways, from so many angles, that you might imagine an account of the events of a single month in Belfast thirty years ago could no longer have the capacity to shock.

But the story of the deadly events of March 1988, pieced together skilfully and dispassionately by filmmaker Vanessa Engle in The Funeral Murders (BBC2, Monday, 9pm), loses none of its impact in the retelling.

It is hard to remember now that there was ever a time before the era of the rolling news cycle, when every citizen with a phone can become an instant photojournalist running their own live broadcast. And yet this film takes place in the spring of 1988, long before smartphones or 24-hour news channels.

So it’s all the more remarkable how much of the events of those bloody days in the spring of 1988 was captured on either news cameras or the army’s 10-inch hele-tele. The resulting footage is so dramatic that at times you have to remind yourself you’re not watching a reconstruction.

The chain of events recounted here began when three unarmed IRA members on a mission to Gibraltar were shot dead in the street by the SAS on March 6th, 1988.

Tensions in the days that followed ran to boiling point, and the British security forces made the decision to stay away from the triple funeral.

But as the bodies were being lowered into the ground, loyalist Michael Stone launched his own assault, indiscriminately lobbing hand grenades into the crowds of mourners, killing three people and injuring sixty.

The crowd surged after him as he fled, and surrounded him. “If a British soldier had done that, he’d probably be awarded for bravery,” says former soldier George Higgins.

One of those killed by Stone – the only IRA member among the three victims – was Caoimhín Mac Brádaigh, or Kevin Brady, whose funeral took place on March 19th.

Gerry Adams describs how, during his funeral, a car came “very, very fast”, and reversed towards the cortege. Its path was blocked, and instantly, it was overrun by mourners.

They were “swarming on the car like ants. It was very animalistic,” says the daughter of one uninvolved Catholic woman who happened to be passing that day. The unmarked car’s two occupants – British army corporals Derek Wood and David Howes – were pulled out and savagely attacked: stripped, kicked in the head, beaten, stabbed, thrown over a wall “like a sack of spuds”.

George Higgins says it was like watching “hyenas” who had “got their kill and they were just ripping it apart”.

The Funeral Murders is an outstanding film, though not because of the questions it lays to rest. Getting at any definitive truth here is, like so much of what happened during the Troubles, swimming through molasses with your arms strapped behind your back.

Most of the key questions remain unanswered: why did the British security forces stay away from the Gibraltar funeral? Was their absence evidence of collusion? What were Wood and Howes doing at Brady’s funeral?

Engle makes the decision to allow what she calls the “battle of the narratives” to play out, striving for balance by allowing voices from both sides to be heard, and skillfully coaxing honest – startlingly so – accounts from eyewitnesses, some of whom have never spoken about the events before. What emerges is a chilling account of a bleak chapter in our history that we can’t afford to forget, no matter how much we’d like to.