Let’s say Room Little Darker is prose with a strong sense of poetry in its corners. Without which it would be Brighter and Littler 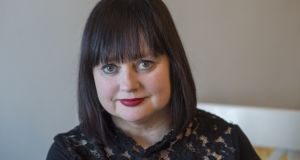 Why do I think of poetry as I read it? Is it poetic prose? What do we mean when we say that prose is poetic? The prose poem itself has been described as short, primarily descriptive or exploratory rather than narrative, and using techniques identifiably poetic, such as fragmentation, compression, repetition and rhyme. If poetic prose contains some or all of these features, it means that a lot of prose might be considered poetic in a very broad sense.

The border between the genres is as shifting as a tideline. One thing that still stands is “versure”, or the emphasis of turning. The turn is an important stance of some sort – usually a line-ending – before movement resumes. The turn is also a pivot. In non-metrical poetry, Philip Hobsbaum prescribes thrust in one line and receptivity in the next – an action some of June’s characters might appreciate. Whatever about that, I find myself thinking poetry whenever prose throws a lot of small stances in my way.

Chase the semantic permutations by adding articles, prepositions and verbs. I believe the title was prompted by a phrase in an Angela Carter book, so chase that. Poetry stops you up and then sends you astray with questions.

In The Music of Poetry, TS Eliot wrote: “Every revolution in poetry is apt to be . . . a return to common speech.” The music latent in poetry, he said, must be that latent in “the common speech of the poet’s place”. It seems to me that the musical latency in common Dublin speech informs the breath of June Caldwell’s prose, but she applies alterations.

The stories are embedded in Dublin life in its various manifestations. They represent headlong crises and allow habitual language rhythms to arise, then compound them with self-conscious imagery to effect what Charles Bernstein would call the “artifice of absorption”. I call it stalling – a musical and conceptual alternative to the line turn. A cell of meaning within the flow of narrative.

One “commonly” poetic tendency is alliteration: “my heavy hints by coyly mauling his trade tools through my fingertips every time I tiptoed by where they rested, redundant (29); “raining down with rivets” (31); “flea fogs of rain” (38); “Panicles of whorled branches, purplish-brown, prised open, spreading in fruit” (36); “sandwiches made at the curvature of dawn by an old crooked cook” (202).

One of my favourites is in Cadaverus Moves [note the title’s rhyme and paradox]: “Time bungles by on the long borrow” (201). Here, as in the other examples, we have both alliteration and a great image complex, the common language made uncommon by the application of poetic principles. Conceptual, narrative and sonic lines tangle, stall, and become a station.

Rhyming slang might not be considered poetry exactly because it’s primarily rhyme, but it can’t be excluded from the poetic continuum. It occurs (it probably had to occur) at its poetic cleverest: “boat race;” “skin ‘n blister;” “Elliot Ness” (204).

The opening sentence of Cadaverus Moves seems perfectly poetic to me – musically and semantically. The present participles are continuous movement but within a stillness that installs itself with a sudden rhythmic demise. “There’s a fan whirring and a smell of slag intestines snaking through to where I sit waiting to see a dead body for the first time.” The “through” after “snaking” is just right to give some duration while also making a transition to the slowing, then absence, of action.

Syntactical play has been a feature of prose for so long now that it is prose, but poetry saw it first. It’s exuberant in Room Little Darker. Here’s an example which I’ve whimsically set in lines that also exhibits some of the poetic principles I’ve identified: rhyme; wordplay; symbolic sentence structure and rhythm; image complexes.

The room would turn into a spinning
fucken barrel turning shrill pork belly
with them naked rolling and
banging into the ridges
with running whiskey gag.
Wood burner he nicked farting
out over the leftover specks of fire on
cling-film skin.