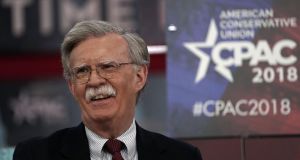 Shortly before 4pm on Thursday, John Bolton, the unmistakable mustachioed former US ambassador to the United Nations, was spotted entering the West Wing. Two hours later President Donald Trump tweeted that Bolton would replace HR McMaster as his national-security adviser.

Although it was not quite as brutal as Trump’s firing of his secretary of state, Rex Tillerson, last week – the former head of ExxonMobil was relieved of his duties via Twitter – McMaster’s dismissal was cold and calculated.

Choreographed statements from McMaster and others emanated from the White House within minutes of the announcement, praising the three-star general’s service. Although McMaster’s future had been in doubt for some time – the president was particularly furious with the general’s claim that the evidence of Russian meddling in the 2016 US presidential election was “incontrovertible” – his departure was sudden.

The arrival of Bolton, a well-known hawk, in the West Wing is highly significant. Together with the appointment of Mike Pompeo as secretary of state, pending his confirmation by the United States Senate, it is likely to signal a shift to the right in US foreign policy.

Both men assume the roles at a sensitive moment, with major decisions looming on North Korea and Iran, while negotiations on the Middle East peace process continue behind the scenes, led by Jared Kushner.

On Iran, the appointments of Bolton and Pompeo make it increasingly likely that the United States will pull out of the 2015 nuclear agreement. The next deadline falls on May 12th. In January Bolton described the agreement as a massive strategic blunder.

As head of the CIA and during his time in Congress, Pompeo too has taken a hard line on Iran, and he is likely to advise the president to withdraw – Trump pinpointed Tillerson’s stance on Iran as one of the reasons they parted ways.

Bolton’s position on North Korea is even more belligerent. He argued this year that the US could legitimately pre-emptively strike the rogue state. How this will sit with Trump’s new-found willingness to meet Kim Jong-un remains to be seen.

Bolton and Trump hold widely divergent views on US involvement in Iraq. Bolton was one of the architects of American intervention in the region 15 years ago – a war that Trump has consistently criticised – when he worked for George W Bush.

Although differences in policy characterise the relationship between the two men, Trump is likely to welcome Bolton’s stance on Russia. Unlike McMaster, Bolton has cast doubt on Russian involvement in the election, sharing the president’s view that the intelligence community has been politicised.

How the two men will work on a personal level will be intriguing. In contrast to McMaster – a formal, organised army general – Bolton is a big personality, fond of brash statements.

His communication skills are likely to be a plus for Trump, however. Bolton is the second presidential appointment in the past week to have a high media profile. Larry Kudlow, a well-known face on CNBC, was picked by Trump to succeed Gary Cohn as head of the National Economic Council.

The president is likely to ensure both figures continue to appear on TV. His trade tsar, Peter Navarro, has also been a regular presence on cable television of late. For a president who believes that the mainstream media is against him, ensuring the Trump message is communicated over the airwaves is a key priority.

No significant medium- or long-term strategies are being developed on major international issues. Meanwhile, our adversaries are able to strengthen their positions

The latest changing of the guard at the Trump White House has again underscored the volatility of the current administration – a trait that could have serious ramifications given the string of major global issues on the agenda.

Brett Bruen, a former state department official, says that the haphazard firing of senior staff is worrying. “Such short tenures of national-security advisers have real and serious consequences on the operations of the National Security Council, ” he says, noting that other officials working on highly sensitive global threats are also forced out. “No significant medium- or long-term strategies are being developed or executed on major international issues. Meanwhile, our adversaries are able to strengthen their positions.”

As Bolton prepares to join the administration next month, the focus is turning to who may be next in the line of fire, with the futures of Trump’s defence secretary, Jim Mattis, and chief of staff, John Kelly, now in doubt.

Kelly was brought into the West Wing last summer to help bring some control and discipline to the workings of the administration. More than six months later his presence does not appear to have made much impact.

This week there were reports that Trump is considering abolishing the role of chief of staff, and instead performing the duties himself. As a politician who likes to shake things up, such a move may be a real possibility.