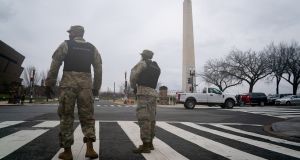 Members of the New York Army National Guard prepare to close a road near the White House in Washington, DC on Tuesday. The city’s mayor, Muriel Bowser, urged residents not to engage with any protesters ‘seeking confrontation’. Photograph: Erin Scott/Bloomberg

Residents of Washington, DC have been urged to stay away from downtown on Wednesday, as the city braces itself for protests to coincide with a joint session of Congress at the US Capitol.

With Congress due to certify Joe Biden’s victory in November’s presidential election, thousands of supporters of president Donald Trump are expected to descend on the capital, with many already gathering on Tuesday night.

Washington mayor Muriel Bowser has deployed about 340 of the city’s 2,700-strong National Guard to reinforce local police amid fears that violence could flare.

On Monday night, the leader of the far-right Proud Boys movement, Enrique Tarrio, was arrested by police in Washington, DC on charges of burning a Black Lives Matter flag in the city at a “Stop the Steal” demonstration last month. He was carrying two firearms, police said.

Members of the group and other far-right organisations, as well as Trump supporters from across the country, are expected to protest in the capital at what they claim was a rigged election.

Mr Trump has indicated he will make an appearance at the rally and has been encouraging supporters on Twitter to attend.

Washington was the site of unrest over the summer when protests erupted over the police killing of African-American man George Floyd in Minneapolis. Mr Trump was widely criticised for deploying law enforcement to disperse protesters as he left the White House to pose in front of a nearby church with a bible.

In letters to the acting attorney general, secretary of defence and secretary of the army on Tuesday, Democratic senator Chris Murphy reminded authorities of a new law requiring armed personnel and federal law enforcement officers to wear visible identification when engaged in crowd control or civil disobedience.

Recalling last June’s events outside the White House, he wrote: “No administration has the authority to deploy unidentifiable law enforcement or members of the armed forces in response to a civil disturbance.”

In a highly unusual intervention, 10 former defence secretaries published an opinion piece in the Washington Post on Sunday, warning against involving the US military in election disputes. “American elections and the peaceful transfers of power that result are hallmarks of our democracy,” they wrote. “This year should be no exception.”

They also noted that the presidential election was over. “The Electoral College has voted. The time for questioning the results has passed; the time for the formal counting of the electoral college votes, as prescribed in the constitution and statute, has arrived,” they wrote, referencing the certification procedure on Capitol Hill, which is set out in detail in the US constitution.

Ms Bowser, who clashed with Mr Trump over the legality of deploying federal troops last year, urged Washington residents to be on guard this week. “I am asking Washingtonians and those who live in the region to stay out of the downtown area on Tuesday and Wednesday and not to engage with demonstrators who come to our city seeking confrontation,” she said. “We will do what we must to ensure all who attend remain peaceful.”

As members of Congress gather at the Capitol on Wednesday, Kelly Loeffler was the latest Republican to indicate she will object to the Electoral College votes, joining at least 12 other senators including Ted Cruz and Josh Hawley.

More than 100 members of the House of Representatives are also expected to challenge the results in some states. However, president-elect Joe Biden is expected to be declared the next president of the United States, having amassed more than the 270 electoral votes needed to win in November’s election.

While the 117th Congress will meet on Wednesday, the final make-up of the two-year Senate has still to be confirmed, with two seats up for grabs in Georgia’s run-off elections, which took place on Tuesday.

Polls were due to close at 7pm local time on Tuesday night, with indications that turnout was lower than in November’s election. Democrats need to win both races to secure 50 seats in the 100-member Senate chamber. This would give the party an effective majority as incoming vice-president Kamala Harris has the casting vote.