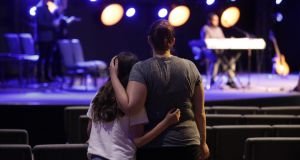 People embrace during a prayer vigil at Bridge Church the day after a mass shooting in Virginia Beach, Virginia. Photograph: Chip Somodevilla/Getty 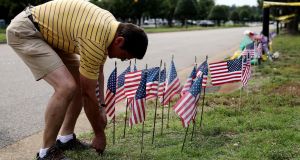 Rich Lindgren places 12 US flags in the ground at a makeshift memorial outside the scene of a mass shooting at the Virginia Beach Municipal Center, Virginia Beach, Virginia. Photograph: Chip Somodevilla/Getty

The United States is mourning the latest victims of a mass shooting after a man opened fire in the city of Virginia Beach on Friday, killing 12 people.

The long-term government employee began shooting on Friday afternoon at the municipal building where he worked in the coastal city in Virginia.

After killing one person in a car outside the building, he moved inside and began shooting at targets across three floors of the building. He was shot and killed during a gun battle with police who rushed to the scene after receiving emergency calls from the site.

The perpetrator was named as DeWayne Craddock, a 40-year-old who had worked as an engineer for 15 years for the Department of Public Utilities. According to reports, he had submitted his resignation by email earlier that day.

Twelve people, plus the shooter, were killed in the incident. At least three more people were seriously injured.

Most of the victims were government employees and included engineers, engineering technicians and administrative assistants. A contract worker was also killed in the attack.

Police Chief James A Cervera described a “horrific event of unbelievable proportion.” “This is a horrific crime scene,” he said, noting that the gunfight between the shooter and the police was a “large, longterm” engagement.

US president Donald Trump said the federal government would offer any help needed.

“The Federal Government is there, and will be, for whatever they may need,” he tweeted. “God bless the families and all!”

The shooting has again raised questions about America’s gun laws.

In a statement, House Speaker Nancy Pelosi said the American people “share the grief of the entire Virginia Beach community”.

She called on the Senate to vote on the “commonsense, bipartisan gun violence prevention legislation” that was passed by the House of Representatives in February.

That legislation broadens the federal system of background checks for the purchase of weapons. Only eight Republicans voted to support the legislation in the House in February. Senate Republicans, who control the Senate, have indicated they will not hold a vote on the legislation, which is opposed by most in the party.

Virginia also has a strong history of gun ownership rights, despite the Virginia Tech shooting in 2007 which saw 33 people lose their lives.

A bill containing a raft of gun control measures was blocked in the state legislature earlier this year.