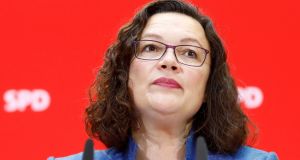 SPD leader Andrea Nahles said she was standing down after a bruising parliamentary party meeting last week showed “that the necessary backing is not there to perform my duties”. Photograph: Michele Tantussi/Reuters

Germany’s oldest party, the Social Democratic Party (SPD), is in disarray after leader Andrea Nahles announced her resignation on Sunday after just 400 days in office.

Her departure as party chair and and parliamentary party leader, adds fresh uncertainty to the future of Germany’s ruling grand coalition coalition in Berlin.

Ms Nahles said she was standing down after a bruising parliamentary party meeting last week showed “that the necessary backing is not there to perform my duties”.

In an email to members, she wrote: “I hope very much that you succeed in increasing trust and mutual respect and, in this way, find people you can support with full vigour.”

Speculation about the 48 year-old’s future had been growing after the SPD scored its worst-ever result in a nationwide poll in last week’s European elections. The party finished in third place with 15.8 per cent, down 11 points on 2014, and lost its seven-decade lead in Bremen, a former SPD city-state stronghold.

Front-runner as new SPD leader, the seventh in a decade, is federal finance minister Olaf Scholz. The former mayor of Hamburg positioned himself front and centre on Sunday, describing in a newspaper interview as “indefensible” the idea of another grand coalition with the CDU.

“Three grand coalitions in a row would not do German democracy any good,” he said. “Nobody wants a continuation of the current coalition after 2021 – not the citizens, not the CDU/CSU and definitely not us Social Democrats.”

Ms Nahles took over in April 2018 from Martin Schulz, whose return from the European parliament and early surge in polls turned into a federal election rout in 2017. Last week Mr Schulz began sounding out support to take over the job of SPD parliamentary party leader, triggering the latest SPD crisis.

The leadership struggle is part of a wider identity crisis gripping the SPD, as it loses traditional working class voters and struggles to attract new, younger voters with a visible reform agenda.

Squeezed between a centrist CDU and more radical alternatives in the Greens and Left Party, the various camps inside the SPD disagree on how centrist or left it needs to be to survive.

As the race begins again to inherit the SPD leadership, Berlin’s most poisoned chalice, speculation is growing over whether Germany’s ailing coalition can serve its full term – or will stick together to the bitter end for fear of the electorate

A Saturday poll indicated the grand coalition had lost its popular majority, with the Green Party Germany’s most popular for the first time ever. The Forsa poll for RTL television showed the environmental party on 27 per cent, one point ahead of the CDU/CSU.

Last weekend’s European elections saw the Greens double their support from 2014 to 21 per cent of the vote, a shock result that saw CDU/CSU and SPD rush to promise greater efforts on climate change.

“With that, as the latest data shows, they have only strengthened the Green original,” said Mr Manfred Gullner, head of the Forsa agency.

He suggested Forsa’s latest poll made visible a long-term drift by centrist voters away from the CDU/CSU and SPD to the Greens, already palpable in state elections last year.

The poll contributed to the SPD earthquake will have caused alarm bells over at the CDU, too. Chancellor Angela Merkel handed over the party leadership to Annegret Kramp-Karrenbauer six months ago.

With Dr Merkel no longer the political force she was, but not quite gone either, the unprecedented job share has left the new CDU leader struggling to build her public profile, make her mark on the party and shape German political debate to her favour.

After a disastrous European poll result last weekend, Mrs Kramp-Karrenbauer got into a row with a YouTuber, who attacked her’s party “gross incompetence” in an online video seen by 12 million people before the election.

Afterwards, the CDU leader described the video as an unacceptable pre-election intervention – prompting howls of derision, accusations of sour grapes and censorship claims.

While the SPD now has no leader, and the CDU has one too many, Germany’s political landscape is in unprecedented flux

When Dr Merkel formed her first grand coalition with the SPD in 2005, together they captured nearly 70 per cent of the popular vote and 73 per cent of Bundestag seats. Today polls suggest they now longer enjoy even a simple majority.

Amid the SPD chaos, the CDU leadership came together on Sunday for a closed-door meeting.

Nervousness is growing ahead of autumn state elections in eastern Germany that could see the CDU being trounced by the far-right Alternative für Deutschland (AfD).

A poll on Sunday for the Bild am Sonntag newspaper indicated 62 per cent of people do not think Mrs Kramp-Karrenbauer is the right woman for the job.

A brief ray of sunshine in the poll suggested that, unlike the Saturday poll, the CDU remains Germany’s most popular party with 28 per cent, with the Greens on 20 per cent.