London set for Trump visit after he backs Boris Johnson 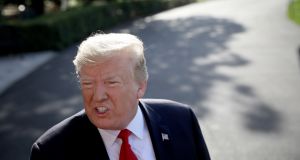 US president Donald Trump: Opposition leaders will not attend banquet held for him by Queen Elizabeth at Buckingham Palace on Monday. Photograph: Win McNamee/Getty Images

Donald Trump arrives in London on Monday for a three-day state visit after endorsing Boris Johnson to be Britain’s next prime minister. Ahead of the visit, the US president criticised Theresa May’s handling of negotiations with the European Union, suggesting that Britain should be prepared to leave without a deal and refuse to pay its £39 billion divorce bill.

Mr Johnson, who is expected to launch his Conservative leadership campaign on social media on Monday, is the frontrunner to succeed Mrs May. Former universities minister Sam Gymah on Sunday became the 13th candidate to enter the contest, promising a second referendum on Brexit.

Conservative MPs will start voting next week in a series of eliminatory ballots to select two candidates to go before the entire party membership. Candidates have been outlining their plans to resolve the impasse at Westminster over Brexit, including proposals to avoid the Northern Ireland backstop.

Home secretary Sajid Javid said Ireland had become “the tail that wags the dog” on Brexit, proposing that Britain should offer to pay for a “digitised” border.

“What I would do is I would make a grand gesture, a grand offer to Ireland that we would cover all their costs. The upfront costs, the running costs of a new digitised border. I think it can be done in a couple of years but we would cover their costs,” he told the BBC’s Andrew Marr Show.

Former Commons leader Andrea Leadsom said she would seek a “managed exit” from the EU without a withdrawal agreement. She said she would negotiate sectoral deals with the EU and alternative arrangements to keep the Border open.

“Discussions will culminate in a UK/EU summit, in September, in Belfast and Dublin, where the EU Council and proposed commission will be invited to agree which measures we will all accept, to ensure a properly managed exit,” she wrote in the Sun on Sunday.

He calls for an “Irish Border Council” modelled on George Mitchell’s talks during the peace process with cross-community representation from Northern Ireland, an independent chair and “a role for the Irish Government and the EU”. He would also seek a time limit to the backstop to be included in an addendum to the withdrawal agreement.

“As part of a package to allow an orderly Brexit, I think this is negotiable. I’ve had conversations with some in the EU about these ideas that have given me sufficient confidence to publish them. The EU wants to see this done,” he told the Sunday Times.

Queen Elizabeth will host a state banquet for Mr Trump at Buckingham Palace on Monday evening but opposition party leaders have said they will not attend. The president will meet Theresa May at Downing Street on Tuesday and attend a commemoration of the 75th anniversary of D-Day at Portsmouth on Wednesday.

1 California shuts down again as US coronavirus cases surge
2 US passengers fly into Dublin: ‘I’m here for six days. I guess I’ll have to stay inside’
3 Maureen Dowd: Biden has his limitations but he’s no Trump
4 Covid-19: 200 to 250 people arriving in Ireland from US daily - Coveney
5 Travel rules unlikely to include mandatory quarantine or cancelled flights
Real news has value SUBSCRIBE