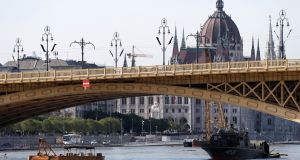 A search operation continues near the Margaret bridge on the Danube river after a boat carrying South Korean tourists capsized in Budapest, Hungary. Photograph: Bernadett Szabo/Reuters

A Hungarian court has ordered the arrest of the captain of a passenger cruiser that collided with a pleasure boat that capsized on the Danube, killing South Korean tourists on board, although it left open the possibility of granting him bail.

Flood waters have prevented attempts to reach the submerged boat on Saturday, three days after it sank in the Hungarian capital with 28 people feared dead, nearly all of them from South Korea.

The Ukrainian captain of the cruise ship, who denies having broken any rules or committing a criminal offence, was taken into custody by Hungarian police on Thursday.

No formal charges have been brought against the 64-year-old, identified by Hungarian police as “C Yuriy”, from Odessa, but his arrest by a Budapest municipal court in effect means he will not leave the city while the case is pending.

The court ordered his arrest for one month with the possibility of release on a 15 million forint (€46,000) bail, prosecution deputy spokesman Ferenc Rab told Reuters.

It is so far unclear what caused the incident, in which the 135m cruise ship hit and sank the smaller pleasure boat on Wednesday night.

Water levels are expected to peak later on Saturday and the current depth of the river, just short of 6m, should fall to about 4m by mid-week, the National Water Authority said in a statement.

That would leave the wreckage very close to the surface, according to sonar imaging, and should make it easier to search it for bodies and prepare to remove it from the riverbed, something divers have been unable to do under the current hostile conditions.

Prosecutors appealed against the bail option, Mr Rab said, so the captain of the cruise ship will stay behind bars until the court rules on the appeal in the next weeks.

The captain’s lawyers said there was insufficient evidence to keep the captain locked up.

“Once he is released on bail he will not be able to leave the boundaries of Budapest,” attorney Gabor Elo said, adding there would be an electronic tracking device on the captain.

“He still feels distraught over the number of victims this accident produced and asked us to convey his condolences to the families of the victims.”

The captain was not at fault and there was not enough evidence to keep him locked up, the lawyer added.

“He committed no navigational error,” Mr Elo said. “A lot of data is missing from the procedure here, barring us from declaring who is at fault and to what extent. Was it one captain or the other, were there external circumstances?”

A spokesman for Swiss-based Viking Cruises, which owns the larger vessel, said in a statement that it was supporting and co-operating with accident investigators.

“We are deeply saddened by the incident and our thoughts and prayers go out to those who were impacted and as well as to their families,” the spokesman said on Friday.

“We understand the captain has been charged by the local authorities and it would be inappropriate for us to comment further while the legal process is ongoing.” – Reuters