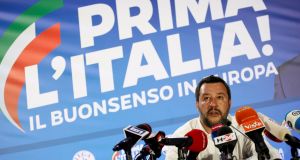 The “squeezed middle” has become popular among political scientists and sociologists as a way of characterising the plight of the middle class in a time of austerity politics. And it has its political equivalent in the changing face of Europe’s political landscape.

The European Parliament elections have been marked by the squeezing of the traditional mainstream middle-ground parties of left and right, the Socialists and Democrats (S&D) and the centre-right European People’s Party (EPP), which lost 70 seats between them – and not just to the populist fringe.

Despite fears beforehand, populists fell well short of taking control of the parliament. The far right will hold about 25 per cent of the seats, up from 20 per cent in the outgoing parliament.

But, apart from the impressive gains made in Italy by its pre-eminent standard bearer, Matteo Salvini, whose League party took some 34 per cent of the vote and swept past its coalition partner and rival, the Five Star movement, and strong gains by the Belgian Vlaams Belang, the far-right results were not startling – mostly modest gains and modest losses all round.

In France Marine Le Pen’s Rassemblement National beat Emmanuel Macron’s En Marche but on a reduced vote, and in Germany, Alternative für Deutschland secured just 11 seats: better than 2014, but worse than the national elections in 2017. In Denmark the DPP lost its MEP representation

Victor Orban’s Fidesz won a strong 52 per cent of the votes in Hungary. Poland’s Law and Justice (45 per cent) held off a multiparty attack from an organised left-wing coalition and won a majority that suggests it will win the forthcoming national elections.

But even if in the inevitable parliamentary regrouping several of the parties rally behind Salvini in the Europe of Nations and Freedom (ENF) group, it is far from clear they will work effectively together because of significant political differences. In the end, the slogans “Italy First” and “Poland First” are not really compatible.

The real winners last week across the EU have been the Greens and Liberals, now, temporarily, known by the clunky title of “Alde + Renaissance + USR” to reflect their new allies, Emmanuel Macron and a strong reformist Romanian group.

Although by no means new to the political scene, both the Green groups have been successful in branding themselves to a degree as anti-establishment and as a breath of fresh air. Fianna Fáil will be pleased to cling to these coat tails.

Progressive middle-class voters wanted more idealistic commitments to policies such as combating climate change and opening borders than the cautious centre provided. And, as they showed in Britain with their support for the Liberal Democrats at Labour’s expense, they were ready to turn to those more willing to robustly defend the EU.

“Alde + Renaissance + USR” will have about 101, largely boosted by Macron’s support, the Romanians, and three new seats in Estonia.

The EPP and S&D no longer enjoy the duopoly that allowed them to dominate the parliament – at least three, if not four, parties are now needed to make a majority. It is a new painful reality for the old guard reflected in the immediate tussle for the nomination of the European Commission presidency.

Ahead of last Wednesday’s summit, leaders of the S&D and the Liberals even elected two each of their number to meet to see if they could stitch up the job between them.

The decline of the two centre parties is not however either a new or an even phenomenon. It manifests itself differently in every member state. Italy’s Christian Democrats, for example, fell apart in the 1990s; its post-communist socialists more recently; Berlusconi’s once-dominant Forza Italia fell into single figures this time; and the socialists are still struggling, at 22 per cent.

In Romania there was a sharp decline in support for the ruling Social Democrats (PSD), which has clashed with Brussels over anti-corruption and rule of law reforms. And in Greece the ruling Syriza performed so badly that prime minister Alexis Tsipras has been forced to call a general election.

But in Spain, the centre-left Spanish Socialist Workers’ Party (PSOE), which won the most votes in that country’s parliamentary elections last month, strengthened its performance in the European elections, likely making it the most dominant party in the centre-left S&D bloc in the European Parliament. Prime minister Pedro Sánchez has already been out leveraging his party’s new standing to claim one of the EU top jobs for his party colleague and former parliament chair Josep Borrell.

There’s also a new bounce in the step of Dutch commissioner Frans Timmermans, the Socialists’ lead candidate for the commission job, after his PvDA came back dramatically from the near dead to take 18 per cent of the vote in the Netherlands.

In the Socialist (S&D) group, the once mighty forces of French and German social democracy are muted while the UK Labour Party’s contribution will be strictly limited to the few months before Brexit.

The party may also yet shortly lose the 12 MEPs from Hungary’s Fidesz party whose leader Orban’s reluctance to comply with EU rule of law standards has seen the party suspended temporarily from membership.

The party’s claim to the right to nominate its lead candidate, Manfred Weber, for the commission presidency has been severely weakened and is being hotly contested within the parliament, calling into question the whole idea of the so-called spitzenkandidat process – under which the political groups nominate a lead candidates for the commission presidency.

Fine Gael, which outperformed most of its party allies by taking an extra seat, will be disappointed.

The European Parliament is entering a new chapter of its history in which there will be a new premium on coalition-building around individual legislative measures and a need for difficult compromises about sharing key posts and committee jobs. It has come through a difficult election but with its legitimacy enhanced by significantly increased turnout to over 50 per cent, and with voters calling a halt to the feared rise of ultranationalism.

It is too early to write off the European project.